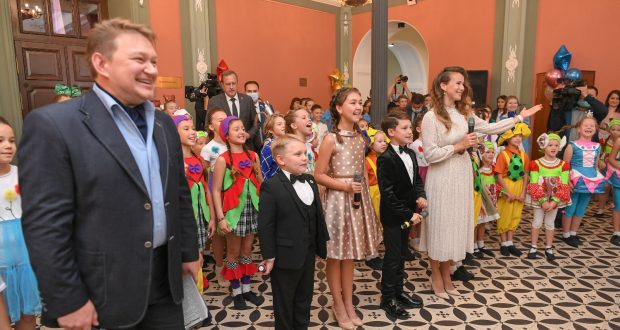 According to Dmitry Tumanov, during the new season of the art residence “Constellation-Yoldyzlyk” it is planned to hold master classes from leading teachers of the Shchukin Theater School and the Russian Institute of Theater Arts (GITIS). In particular, a 10-day master class from Oleg Alekseevich Khrychev, senior teacher of the variety art department of GITIS, promises to become a real quintessence of theatrical skill. As part of the School Classics project, he will hold master classes for children throughout the country. “In 10 days, they will be able to gain basic knowledge of acting skills, which will not let them sink to amateurism, will indicate the right path along which they need to develop. This is the path that will not let you step into the side of the spiritual swamp and unprofessionalism. They will be given the paradigm of the real Vakhtangov school and the basics of directing,” he explained.

According to Dmitry Tumanov, “School Classics” is a great initiative of the President of the Russian Federation. “We will actively work within the framework of the project so that children receive cultural values ​​that can only be gleaned from theatrical art from the school bench. This is necessary so that the younger generation is not infected with the criminal virus of unbridled experimentation, unprofessionalism, and craftiness that the young community sins with. Most importantly, we will protect young people from the negativity that modern youth dramaturgy criminally drags onto the stage by pressing on the festering sores of society. But this is not the subject of divine theatrical art,” Tumanov is convinced.

As Tumanov noted, the movement will present its proposals on the School Classics project to the ministers of culture, youth and education of the republic. “The art residence will join the program with its experience and knowledge. We will provide the best teachers so that the knowledge of the younger generation is pure and bright, and there are fewer rogues from the theater,” he assured.

Dmitry Tumanov also expressed special gratitude to Rustam Minnikhanov for supporting the activities of the art residence. The head of the republic also instructed to restore the building of the residence, which was damaged by a fire in mid-June, in its original form.

In turn, the executive director of the festival, Natalia Smirnova, said that in the new season, the art residence “Constellation-Yoldyzlyk” plans to actively continue the activities begun in the previous season. This is a show of performances, musicals, including as part of touring activities, the implementation of events within the framework of the Pushkin Card, concert thematic programs, master classes, etc. According to Smirnova, the “co-stars” do not lose optimism, and the troupe take place on the basis of sites that survived the fire.

According to Smirnova, on September 14, the second theatrical season will open with a show of the musical comedy “Arshin Mal Alan” at the Pushkin Cultural Center. The next tour of the art residence is scheduled for September 17th. On this day, “Arshin Mal Alan” will be shown in Zelenodolsk at the Gorky Center for Cultural and Folk Art. In addition, there are proposals for organizing performances in Ulyanovsk. Tours are also planned with the play-parable “The Light of a Distant Star”. As part of the grant won, the play, staged based on the life and work of the classic of Tatar literature, laureate of the State Prize of the Republic of Tatarstan named after Tukay Hasan Tufan, will be translated into the Tatar language. A grant for staging a performance in the Tatar language was received from the Commission under the President of the Republic of Tatarstan for the preservation and development of the Tatar language and native languages ​​of representatives of the peoples living in the Republic of Tatarstan.

As Alexander Tumanov, chief director of the art residence, clarified, this season will not do without premieres. This will be the first full-fledged dramatic work of the residence “Beautiful Girls” based on the play by the laureate of the State Prize named after Tukay, the people’s poet of Tatarstan Razil Valeev. The premiere is planned to be presented to the audience in October, but