Home / News / Chulpan Zhalilova about the “Moabit Notebook”: We were shocked by the verses permeated with heroism 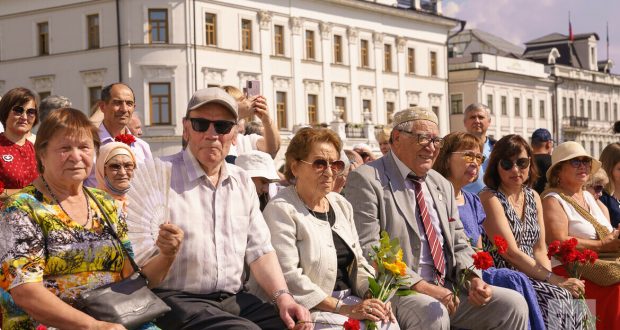 Chulpan Zhalilova about the “Moabit Notebook”: We were shocked by the verses permeated with heroism

An event dedicated to the Day of Remembrance of the Jalilovites was held on May 1 Square in Kazan – on August 25, 1944, Musa Jalil and ten of his associates were beheaded in the Pletzensee prison by decision of the German Imperial Court. At the meeting, the daughter of the poet-hero Chulpan Zalilova told how 70 years ago she first read her father’s poems from the Moabit Notebook.

“I am returning to Kazan to express my gratitude to those who remember the Jalilovites. Years go by, a new generation comes in our place. I live in hope that they too will know the names of our heroes. 70 years ago, I first read the Moabite Notebook. We were shocked reading poems filled with the truth about the war, courage and heroism,” the poet’s daughter shared her memories.

Chulpan Zhalilova recalled that with the support of the museum-apartment of Musa Jalil in Kazan, she attended meetings in many cities and towns of Tatarstan. “We always try to go. In July, we were in the city of Karabash, Chelyabinsk Region, we were very impressed with the performance dedicated to the heroes of our country, and the literary evening, ”the poet’s daughter noted in her speech.

According to Alfat Zakirzyanov, head of the Department of Literature at the IYALI named after G. Ibragimov of the Academy of Sciences of the Republic of Tatarstan, August 25 is a great day for every Tatar and for those who liberated the world from fascism. “For us, it is especially dear, since Musa Jalil and his associates, with their works created in captivity, glorified Tatar literature throughout the world,” the scientist emphasized.

“It seems that every day we understand more deeply the value of the struggle against fascism, the defense of our Motherland. Jalil and his associates showed themselves to be real heroes in this matter. Those who fought alongside him are an example of courage and beauty, the value of the work of Jalil and his comrades is growing every day, ”Zakirzyanov is sure.

Deputy Chairman of the Union of Writers of Tatarstan Ilsiyar Ikhsanova recalled that the Jalilovites were executed precisely at the hours when people gathered at the monument to the poet. “The oldest, Musa Jalil, was 38 years old. This group is referred to in the documents as the “Kurmash Group”. No wonder Gaynan Kurmash was one of the first to be sent to the guillotine. The biggest responsibility was on Musa Jalil, that’s why we call them “Jalilovites”,” she said.