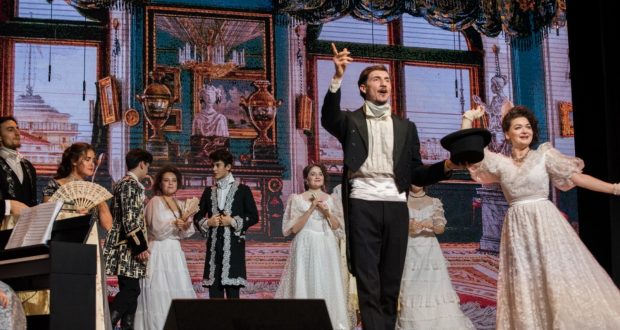 The art residence “Constellation-Yoldyzlyk” continues to develop its touring activities in Tatarstan. Programs for different age groups are prepared by the troupe specifically to involve young people in the cultural life of the republic. In the coming days, residents of the Kamsko-Ustyinsky and Laishevsky municipal districts will become part of it.

In the center of the story is the path of the classic of Tatar literature Hassan Tufan, full of love, hope and overcoming the vicissitudes of fate. Through the prism of the life and work of the Poet, a portrait of all the creators, one way or another affected by repression, is written in the performance.

In 1940, the Poet was repressed and was in the Gulag for 16 years. But despite the horrific torture, he survived, returned to Kazan, retaining his humanity. He, like other heroes of the life drama, faces a moral choice that determines the role and place of man in the common history. Poems by Hassan Tufan, sounding from the stage, fill the performance with subtle lyricism and tragic pathos, reflecting the maximum tension of what is happening, and are the emotional “key” to its comprehension.

On April 7, in the Laishevsky RDC (Lebedeva St., 30) at 14.00, the troupe will present the theatrical performance “The Golden Age of Russian Poetry: Far and Near”.
The program is dedicated to cultural figures who worked at the beginning of the 19th century and left behind a rich literary, poetic, and musical heritage. The production orients the younger generation towards high art and is a kind of source of cultural and moral enrichment.
In addition, on the same day at 18.00, the play “The Light of a Distant Star” will be shown to the residents of Laishevo.

We remind that all the programs of the Constellations-Yoldyzlyk Art Residence are available, including on the Pushkin Card.

Also, in the near future, the Art Residence will visit Kukmor and Nizhnekamsk on tour.