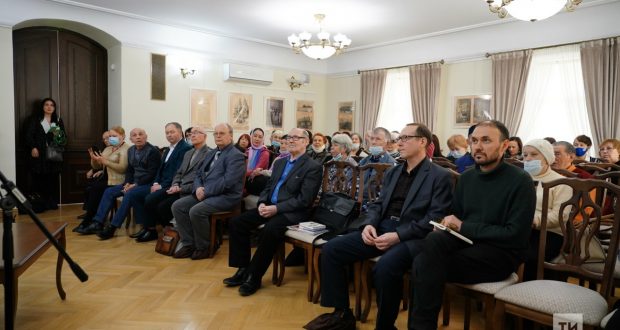 The Literary Museum of Gabdulla Tukay hosted a meeting of artists, whose works this year were nominated for the Republican Prize named after the Tatar classic. During the meeting, they presented their works and exchanged views on topical issues in the field of Tatar literature and art.

Thus, the writer and poet Rashat Nizamiyev was nominated for the book “Constellation of Tatar Composers”, which included a novel about the founder of Tatar professional music Salih Saydashev, a dramatic story about the composer Farit Yarullin and a poem about Rustam Yakhin. According to the author, the work on the book took five years, it also includes memoirs of contemporaries of prominent personalities.

Architect Firdaves Khanov is the author of projects for about sixty objects in Nizhnekamsk. Six of them are presented for the award, most clearly reflecting the Tatar national spirit. “Among them are the first Cathedral Mosque in the new history of Tatarstan, projects for the improvement of springs on the historical lands of the Volga Bulgaria, Tukaya Park,” the author listed.

Tufan Imamutdinov, the chief director of the Tinchurinsky Theatre, one of the founders of the Alif creative association, spoke about the idea and history of the creation of the choreographic performance of the same name. “In the performance, we start with “Iske imlya” and move on to Tukay’s poem “Tugan tel”. Poems were read in the original in Arabic script in their native language. In the poem “Tugan tel” the first letter is alif. Our group came from there. Therefore, the influence of Tukay in our work is great,” the director said.

Author of the book “Kazan. Cinema. From century to century ”Elena Alekseeva wrote her work for 20 years. “I wanted to reflect the history and development of cinema in Tatarstan. The first motion picture in Kazan was released in 1898. In 1918, a cinema association was created. A documentary film about the capture of Kazan was filmed in Kazan. There was also the first national cinema “Chatky”, later it began to bear the name of G. Tukay. The book also contains examples of movie posters from that time,” the author said.

Archaeologist Fayaz Khuzin has been nominated for the Tukay Prize for his work in the field of studying and preserving, popularizing the heritage of the Tatar people. In his speech, he noted the importance of educating national identity and the need to study the native language through the popularization of outstanding personalities.

The artist Anatoly Egorov, composers Ilgam Baitiryak and Rif Gataullin, photographer Rifkhat Yakupov, actors of the Chelny Tatar Drama Theater also spoke about their works presented for the main award of Tatarstan in the field of literature and art.

Director of the G. Tukay Literary Museum Guzel Tukhvatova noted that 15 of the nineteen candidates came to the meeting. “The evening was held in Tatar and Russian. We had a great desire to receive information about each candidate. Among those who came to talk to the candidates were teachers of the Tatar language and literature, scientists, and public figures,” Tukhvatova said.