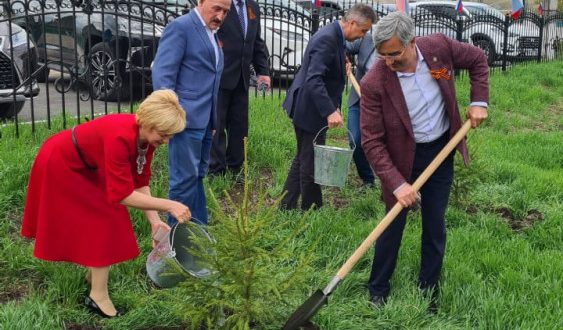 Deputy Prime Minister of Tatarstan, Chairman of the National Council Vasil Shaikhraziev, during a working trip to the Republic of Bashkortostan, visited the village of Aitovo, Bishbulyak region. Here he got acquainted with the activities of the museum of the front-line poet Fatih Karim. Guests at the museum were welcomed   with a chak-chak. Vasil Shaikhraziev congratulated the audience on the upcoming Victory Day.

Chairman of the National Council laid flowers at the bust of the poet. He also took part in planting young trees on the territory of the museum.

We remind  that the Fatih Karim Museum was opened on July 19, 1971. Over time, the building fell into disrepair and needed repairs. In 2017, compatriots from Bashkortostan appealed to  Deputy Prime Minister of Tatarstan, Chairman of the National Council Vasil Shaikhraziev with a request to restore the museum. Vasil Shaikhraziev supported the idea and informed the leadership of the republic.

The modern museum, reconstructed with the support of  President of the Republic of Tatarstan Rustam Minnikhanov, opened its doors again in the native village of Fatih Karim on August 28, 2019.