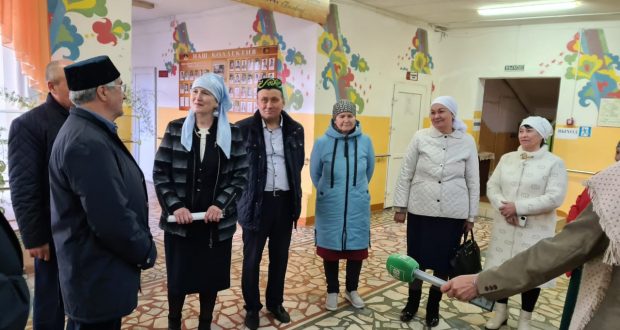 Today, as part of a working trip to the Republic of Chuvashia, Deputy Prime Minister of the Republic of Tatarstan, Chairman of the National Council of the World Congress of Tatars V.G. Shaikhraziev visited MBOU “Shygyrdan secondary school № 1”. Shygyrdan secondary school №1 of Batyrevsky district of the Chuvash Republic has come a long way of its formation and development. It is known that for many years it was a primary national school. In 1941-1945 it had the status of a secondary school, from 1945 to 1949 it was transformed into a seven-year school, and from August 15, 1949, the school again acquired the status of a secondary school.

Today 340 pupils  are  studying  at the school, 31 teachers give lessons. The school has a local history museum, a dance ensemble “Bilyar”, a newspaper “Muktup avazy” is published.

Since 2007,  director of the school has been Gelsiren Abeydullova. We remind  that by the decree of the President of the Republic of Tatarstan dated February 1, 2019 Gelsiren Gadenezhnovna, director of the MBOU “Shygyrdan secondary school No. 1” of the Batyrevsky district of the Chuvash Republic, was awarded the honorary title “Honored teacher of the Republic of Tatarstan.”