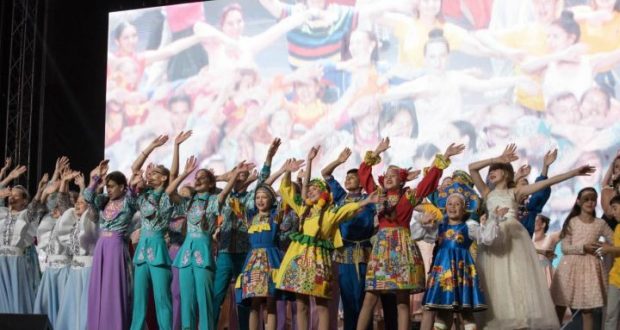 “Constellation-Yoldyzlyk”: results of the qualifying stage

The zonal stage of the XXII annual open republican youth festival of variety art “Constellation-Yoldyzlyk” was held in the Zelenodolsky district. Over 1,100 talented children and teenagers performed on stage during two qualifying days, who presented 204 creative performances, Tatar-inform news agency reports.
On the stage of the gala concert, the participants demonstrated the diversity of cultures of the peoples living in Tatarstan. As the honored worker of culture of the Republic of Tatarstan Vladimir Anosov noted, the participants of the “Constellation-Yoldyzlyk” are the custodians of the cultural heritage.

The head of the Zelenodolsk municipal district, Mayor of the city Mikhail Afanasyev, welcoming the participants of the zonal qualifying stage, noted the efforts of children preparing for the festival throughout the year. He expressed his gratitude to parents and teachers who help to reveal the creative potential of the participants of the popular festival.

The mer also noted that this year a Center for Development Culture will be created in Zelenodolsk, which will also become a platform for preparations for the Constellations-Yoldyzlyk festival.

In addition to the concert, round tables were held as part of the qualifying round, where members of the jury and teachers were able to talk “without ties”.

For the participants of the qualifying round “Constellations-Yoldyzlyk” master classes were organized by vocalist, participant of the show “Main Stage” on the TV channel “Russia 1” Danil Buranov and singer, actor, laureate of international festivals Vladimir Shnitko.

Already from 9 to 13 April, within the walls of the KSK KFU UNICS and the Art Residence “Sozvezdie-Yoldyzlyk” a superfinal will be held, where the finalists of the qualifying rounds will compete for the opportunity to perform at the Gala Concert, which will be held on April 22 at the CRC “Pyramid”.

It should be noted that the festival movement “Constellation-Yoldyzlyk” is held under the auspices of the Commission of the Russian Federation for UNESCO and under the patronage of the President of the Republic of Tatarstan Rustam Minnikhanov.