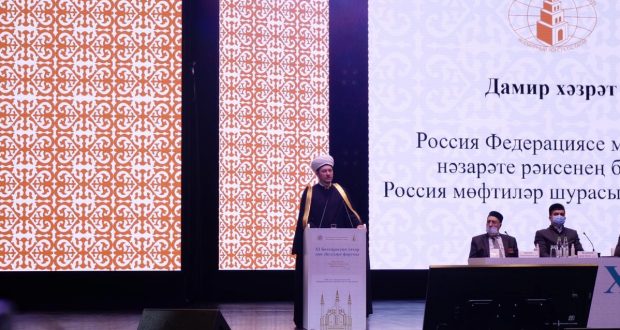 Damir Mukhetdinov, First Deputy Chairman of the Spiritual Directorate of Muslims of the Russian Federation, member of the Presidium of the Council of Muftis of Russia, spoke at the XI All-Russian Forum of Tatar Religious Figures “National Life and Religion”.

Damir Mukhetdinov  welcomed  the participants of the plenary session on behalf of the Chairman of the Religious Board  of Muslims of the Russian Federation, Chairman of the Council of Muftis of Russia, Mufti Sheikh Ravil Gainutdin. He expressed his condolences in connection with the tragedy that occurred on May 11 in Kazan.

Damir Mukhutdinov spoke about preparations for holding events within the framework of the 1100th anniversary of the adoption of Islam by the Volga Bulgaria.

“Our goal is to celebrate with dignity the 1100th anniversary of the adoption of Islam by the Volga Bulgaria. The celebration of this date should give a new impetus to spiritual life. This should be a holiday not only for Tatarstan, but for the whole of Russia, ”he stressed.