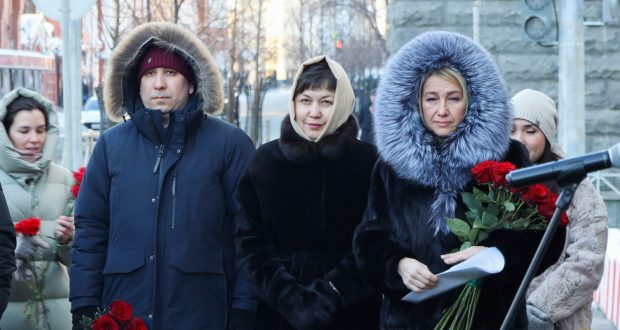 The head of the Executive Committee of the World Congress of the Tatars Danis Shakirov laid flowers at the memorial plaque. The event was also attended by the Minister of Culture of the Republic of Tatarstan Irada Ayupova, Executive Director of the Fund for Support of Cultural Development under the President of the Republic of Tatarstan Nuria Khashimova, Head of the Department of Culture of Kazan Azat Abzalov, daughter of Fuat Mansurov and others.

Fuat Shakirovich Mansurov was born January 10, 1928 in Alma–Ata in a Tatar family. He studied and subsequently taught at the Physics and Mathematics Faculty of the Kazakh State University. He graduated from the Alma–Ata State Conservatory. Conductor of the Bolshoi Theater since 1969. Since 1989 – chief conductor and artistic director of the State Symphony Orchestra of the Republic of Tatarstan.

Developed and implemented a new method of training orchestral musicians and a system of exercises to adapt to the game in the symphony orchestra. Conducted seminars on the upgrading of skills for conductors on the basis of the museum–apartment NS Golovanov. He created the author’s course “Working with orchestral groups” for students of the conductor’s faculty of the Moscow Conservatory.

Fuat Mansurov – a man with an interesting fate and extraordinary magnetism of personality. The only Russian conductor academician of the International Academy of Sciences, laureate of international and All–Russian competitions.