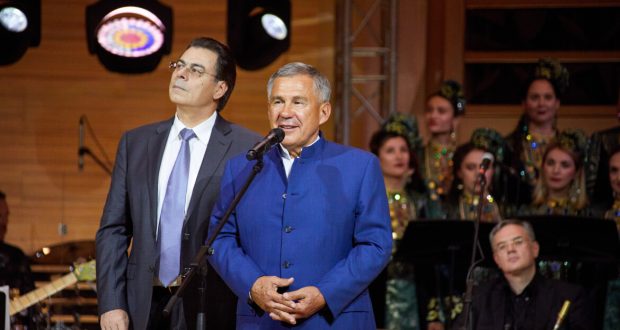 Journey of Ibn Fadlan and conversations with Sergei Kiatrov
The opening of the Days of Culture of the Republic of Tatarstan in the capital took place on August 21 at the Central House of Cinematographers. Here, for the first time, Muscovites were shown the documentary-feature film “Ibn Fadlan”, based on the “Travel Notes” of the Arab diplomat Ahmed ibn Fadlan. On the same evening, a creative meeting with the creators of the first psychological ethno-thriller “Mikulai” in the history of the Republic of Tatarstan took place. Director Ilshat Rakhimbay spoke about the work on the film.

But the acquaintance with the Tatar cinema at the Cinema House did not end there. On August 22, the Tatarmultfilm studio on the big screen showed young viewers the animated films Revision Tales and Kyndykan, created jointly with Yakut animators. Then viewers over 12 years old were invited to linger and watch the film “Insaf”, based on the play by Rabit Batulla “Forgive me, mother.” The Tatar film marathon ended on August 23 at the Poklonka cinema with three bright films at once: Halima, Mulla and Isanmesez.

At the opening of the Days of Tatar Children’s Literature on August 24, the Deputy Plenipotentiary of the Republic of Tatarstan in the Russian Federation Emil Fayzullin noted that representatives of the Tatar people honor their traditions. Annual concerts, exhibitions, round tables in Moscow confirm that wherever a Tatar lives, he does not forget his roots, his heritage.

“Tatarstan is a republic that, like a mirror of Russia, reflects the diversity of peoples and friendship. This is what we always demonstrate within the framework of the Days of Culture of the Republic of Tatarstan in Moscow,” he said.

The Days of Tatar Children’s Literature were held at the State Children’s Library of the Russian Federation. Here, master classes on graphics were held for the guests, and Russian-Tatar cartoons were shown. On the site of the library, there was a talk about animation with director Sergei Kiatrov, a meeting with children’s Tatar writers, a round table on the development of youth reading and many other surprises.

Guests of the library could appreciate books and magazines in Russian and Tatar languages ​​here – an exhibition of Tatarstan publishing houses was organized on the first floor. On the second and third floors, there is an exposition with Tatar folk art crafts, as well as pictures, children’s drawings and dolls in national costumes.

“Muscovites love and appreciate the original creativity of Tatar artists”
Traditionally, on the Days of Tatar Culture, a laying ceremony was held at the monument to the great poet Gabdulla Tukay, which is installed in the very center of Moscow. For the Tatars of the capital, this place has long become a landmark.

After the ceremony, an exhibition dedicated to another iconic Tatar artist, Musa Jalil, opened at the Tatar Cultural Center in Moscow. The guests were presented with rare photographs from the life of the poet and clippings from magazines and newspapers for which he wrote.

August 25 marked the 78th anniversary of the death of the poet and his associates. The memory of the dead was honored at the monument to the Hero of the Soviet Union Musa Jalil, located on the street of the same name in Moscow.

Days of Tatar culture in Moscow ended with a gala concert at the International House of Music. The event was attended by the President of Tatarstan Rustam Minnikhanov, representatives of the Tatar metropolitan public, State Duma deputies, people’s artists of the Republic of Tatarstan and the Russian Federation and other honored guests.

The head of the republic, together with the deputy head of the Moscow administration Alexander Gorbenko, presented awards to public and cultural figures. In particular, a letter of thanks from Moscow Mayor Sergei Sobyanin was awarded to Olympic figure skating champion Kamila Valieva.

“In Moscow, they love and appreciate the original work of Tatar masters of art,” Gorbenko recalled. He conveyed to the President of Tatarstan and other guests congratulations from the mayor of the capital.

During the concert, songs from the golden collection of Tatarstan were performed by People’s Artists of the Republic of Tatarstan Filyus Kagirov, Aidar Suleymanov, Alina Sharipzhanova, Ilnar Miranov, Chulpan Yusupova, Ilgiz Shaikhraziev and many others. Creative teams of Tatarstan pleased the guests with dance numbers. After the end of the concert program, guests and participants traditionally sang together the unofficial anthem of the Tatar people “Tugan tel”.