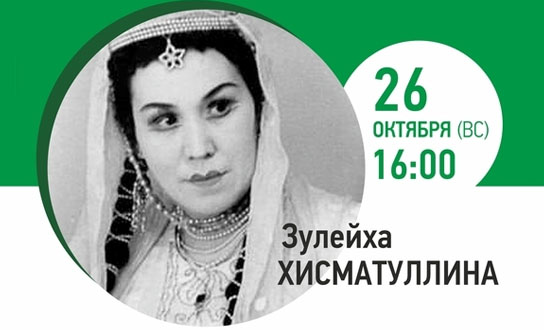 This weekend, the library of the Tatar Cultural Center hosts a concert “Far Away Music”, dedicated to the great Tatar singer, People’s Artist of Russia and Tatarstan Zuleikha Khismatullina.

Holding the events dedicated to outstanding representatives of Tatar culture, has become a tradition of the Tatar cultural center. In May of this year, the 100th anniversary of the legendary opera lady singer Munira Bulatova (1914-2011) was celebrated, who yet in a student prewar years appeared on the scene of House of Asadullayevs.

The name of Zuleikha Gataullova Khismatullina is also well known for Moscow lovers of opera and chamber music. Triumphant performances by Zuleikha Khismatullina in the capital will forever remain in the memory of several generations of Moscow Tatars.

A representative for the first turn-out of the Kazan Conservatory, Zuleikha Khismatullina in years of 1945-1976

was a leading soloist of the Tatar State Opera and Ballet Theatre named after Musa Jalil. On the opera scene, the lady- singer has created more than 40 vivid, memorable images, including Cio-Cio-San in “Madame Butterfly” by Puccini, Tatyana in “Eugene Onegin,” by Tchaikovsky, Zemfira in “Aleko” by Rachmaninov, Aida in Verdi’s opera of the same name. The most famous Tatar composers have dedicated their works to Zuleikha Khismatullina. Major parties in operas “Namus” and “Tyulyakov” by N. Zhiganova; “Samat” and “On the Bank of Dema” by H.Valiullina; “Unsent letters” by Dzh.Fayzi were created based on the creative personality of the singer. Zuleikha Khismatullina – the first performer of many well-known songs and romances by M.Muzafarov, A.Klyucharev, A.Monasypova, Z.Habibullin, R.Yakhin and others. For many years, Professor Zuleikha Khismatullina taught in her native Kazan Conservatory.

The concert dedicated to Zuleikha Khismatullina will combine performances and memories of the singer, performance of works from her extensive repertoire, Tatar classics. People’s artists of the Republic of Tatarstan Zukhra Sakhabieva and Eduard Treskin; Honored Artist of the Republic of Tatarstan, singer and vocal teacher Naila Sagirova; singer Zulfia Habibullaeva; the ensemble of Tatar song “Idel” are going to take part in a concert at the Tatar cultural center (artistic director Sania Shakirova). Historian Marat Safarov will speak about life story of a creative way by Zulekiha Khismatullina historian Marat Safarov.