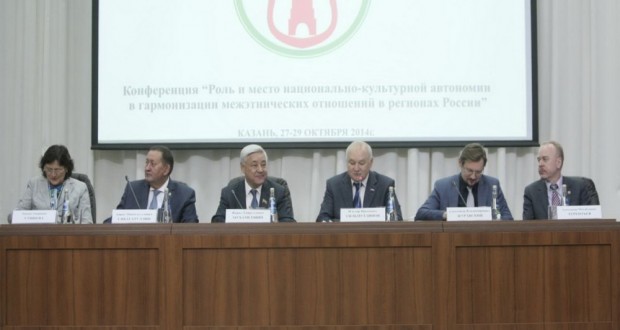 Farid Mukhametshin: “The national-cultural autonomy – an important tool in maintaining internal security of the country”

October 28, at the conference “The role and place of national-cultural autonomy in harmonization of interethnic relations in the Russian regions” representatives of NCA from more than 30 regions of Russia discussed the aspects of the strategy of national policy of the country. The conference was chaired by chairman of “Federal National Cultural Autonomy of Tatars” Ildar Gilmutdinov. At the plenary meeting, the Chairman of RT State Council, Chairman of the Assembly of the Peoples of Tatarstan Farid Mukhametshin spoke.

Head of the parliament, opening plenary session, noted that the habitual composing parts of modern Tatarstan have become international harmony, tolerance and respect for own and others’ cultural and historical traditions. This has been achieved, among other things, thanks to the work of the Council under the President of Tatarstan on heritage and interfaith relations, approval of a new edition of the Concept of State National Policy of Tatarstan, implementing departmental programs, contributing to the development of national culture and preservation of harmony and much more.

Turning to the subject of implementing the strategy by the national policy of Russia, Farid Mukhametshin suggested that harmonization of interethnic relations are given due attention at the federal level. He drew the attention of participants to the outcome of last meeting of the Presidium of the Council of the Russian Federation of the RF legislators under the Federal Assembly, where the head of Tatarstan parliament had expressed his views on the development of mechanisms of regulating interethnic and interfaith relations, noting that part of the transition of authority in this area from one ministry to another somewhat complicates the work, causing a “loss of time” and “personnel reshuffle.”

Chairman of the Assembly of the Peoples of Tatarstan said that proposals made him in Moscow were put in a resolution of the meeting – these are introduction of common methods of monitoring ethnic and religious situation in the regions of Russia, as well as a comprehensive assessment of the regions. Among the proposals – raising the status of national-cultural autonomy, giving them the right of advisory body to the Government of the RF subjects, as well as granting the right of legislative initiative for appropriate range of issues.

Farid Mukhametshin considers indispensable the role of national-cultural autonomies, as this institution helps to keep the traditions accumulated by peoples for centuries. At the same time the leaders of the NCA, having authority in the

Diaspora should help compatriots in adaptation process. The head of the parliament added that such a structure should be actively involved in the life of our society.

relations Ministry of Regional Development of the Russian Federation Alexander Zhuravlev, RT Culture Minister Airat Sibagatullin, Chairman of the Public Chamber of the Republic of Tatarstan Anatoly Fomin, Deputy Chief of Staff to the President on matters of domestic policy Alexandr Terentev and others.

Aigul Zalegdinova, department on interaction with public and the media of RT State Council