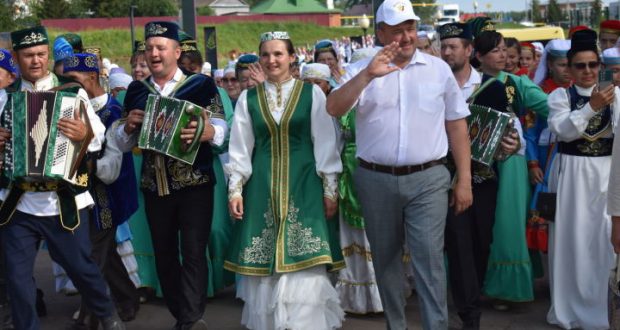 The festival “Evening Gatherings”, held by the Department of Culture for the seventh time, is becoming more and more popular every year. This year it was held as part of the Year of Preservation of the Cultural Heritage of the Peoples of Russia.

This year, the Kaibitskie Zori newspaper joined the festival in order to preserve ethno-cultural values ​​and traditions in Tatarstan and other regions, create folk games, strengthen ties between generations, and expand creative cooperation with folklore groups.

On the day of the holiday, the people of Kaibi were pleasantly surprised. On the central streets of the regional center, accordion tunes sounded, folklore ensembles in national costumes marched, performing Tatar, Russian, Chuvash, Kryashen songs.

The friendship of peoples manifested itself especially brightly at the Evening Gatherings. As the head of the culture department Ramilya Ablyazova noted, the scenario of the holiday was drawn up with an emphasis on rallying representatives of different nationalities, since tolerance, that is, respect for people of other nationalities, is one of the most important issues of our time. Tatar folklore ensembles moved to the venue of the festival from the museum named after Galiya Kaybitskaya. At the crossroads of the main streets, they were greeted with songs and dances by Russian folklore ensembles, a little later the Chuvashs and Kryashens joined them. Among them was the head of the district, Albert Rakhmatullin. So, with songs and dances, they reached the Dubrava park. On the Maidan of Sabantuy, the appearance of this cheerful noisy procession was awaited by tribunes full of spectators. The “Evening gatherings” were attended by the children’s dance group “Alchachak”, the soloist of the folklore ensemble “Syumbel” Gulyuz Sirazieva and the duet of accordionists “RamDan” from the Atninsky district, the Chuvash folklore ensemble “Helhem” from the Drozhzhanovsky district, the folklore group “Ummegulsem” from the village of Kul-Cherken, Buinsky district, the Veres ensemble from the city of Kazan, our countrywoman Milyausha Gafurova-Ibragimova from Nizhnekamsk, folklore and vocal groups, harmonists. Once again, our folk children’s dance group “Avyl dance”, which is known outside the republic, also presented its skills. All of them were greeted by the head of the district, Albert Rakhmatullin.
– The festival “Evening Gatherings” has become a brand of the Kaibitsky district. I believe that in the near future it will acquire a republican scale, – said Albert Ilgizarovich. – This wonderful holiday was held in all villages of our multinational region. Cultural workers who held this event in the settlements gathered at this large venue to show off. Taking this opportunity, I express my gratitude to the Minister of Culture of the Republic of Tatarstan Irada Ayupova, the head of the Department of Culture Ramila Ablyazova for their contribution to the preservation of the cultural heritage of peoples.

Razi na Ismagilova, the editor-in-chief of the “Tugerek uen” magazine, noted that she was coming to Kaibitsy for the second year in a row to participate in the “Evening Gatherings”. On behalf of the Ministry, she thanked the organizers for their careful attitude to traditions. Many songs sounded at the festival, folk games were held, the participants danced from the heart, attractions worked for children.