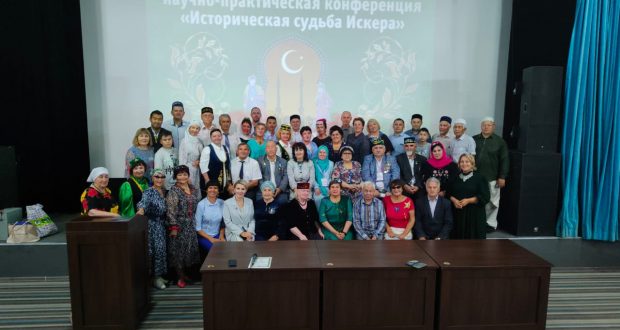 The historical fate of Isker

The historical fate of Isker is the name of the XIV All-Russian Scientific and Practical Conference held in Tobolsk on August 5, 2022 as part of the XIII International Festival “Historical and Cultural Heritage of the Siberian Tatars “Isker-җyen”. The conference was held on the basis of the recreation center “Synthesis” in Tobolsk.

The founder and organizer of the event is the Regional Tatar public organization “Heritage” in the Tyumen region (author and founder of the project Shamsutdinova Louise Alimchanovna), with the assistance of: the World Congress of Tatars, the Tyumen Regional Duma and the Administration of the city of Tobolsk.

The work of the scientific and practical conference began with a welcoming speech by Shamsutdinova L.A., Chairman of the Council of the Regional Tatar Public Organization “Heritage” in the Tyumen region, head of the historical and memorial complex “Isker”; Zubova Ya.S., First Deputy Head of Tobolsk; Mitryushina L.V., head of the Tobolsk municipal district, Burkhanov A.A., head of the Committee for work with local historians of the Executive Committee of the World Congress of Tatars, chairman of the NGO “Society of Tatar local historians of the Republic of Tatarstan”, professor, honored worker of science of the Republic of Tatarstan, academician of the Russian National Academy of Sciences, PANI , AVIN RF and MGA “Europe-Asia”; Ulturgasheva N.D., Head of the Department of Theory and History of Folk Artistic Culture of the Kemerovo State Institute of Culture, Doctor of Cultural Studies, Professor, Honored Worker of Culture of the Republic of Tyva, Honored Scientist of the Republic of Tyva.