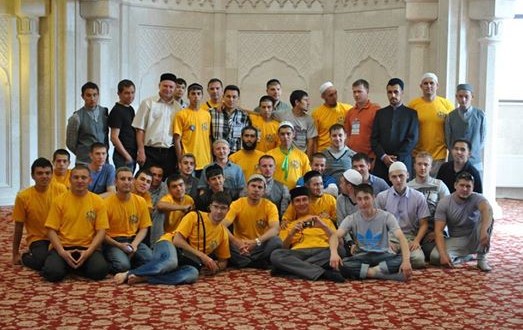 May 14, Kazan International Festival of Youth “Maksat” opened at the Kul Sharif mosque. The opening ceremony was attended by Minister of Youth Affairs and Sports Rafis Burganov.

The VIII International Youth Festival “Maksat” will be held from May 14 to 20, 2014. 100 youngsters from 20 regions of Russia , as well as foreign countries will gather in the Republic of Tatarstan for the exchange of experience, to create new productive relations, and strengthen the unity between fellow countrymen. The festival, “Maksat” will be attended by guests from Kazakhstan, Ukraine , Belarus, the first time the festival delegates come from the Crimea.

International Festival “Maksat” – successor to the Muslim Youth Festival , which has been held for seven years. Organizers of the event, considering the expansion of geography and facets of the festival, attached scientific and secular aspect to the event aimed at approaching compatriots on traditional religious, moral and cultural values.

The purpose of the Festival – the union and cooperation between young people of Russian regions and foreign countries to jointly address problems within the society. Educating young people in social activities , thrust to the completion of their knowledge.

The event was organized by the Ministry of Youth and Sports , the RT Religious Administration of Muslims , the Federal National Cultural Autonomy of Tatars, Youth center “Idel ” with the support of the Office for Cooperation with Religious Organizations, Department of the President on matters of domestic policy.

Creating a positive image and strengthening the unity of the Russian youth contributes to the spiritual and moral prosperity of society and gives the opportunity to discover young people the importance of traditional values in the modern world. In particular for solving these problems the festival program foresees discussions and round tables with debating the most pressing youth issues, seminars, lectures, competitions, meetings and discussions with religious leaders, academics, politicians and businessmen, tours of Kazan and the ancient city of Bolgar , visiting Republic of Chuvashia, the work of the press center FMM .