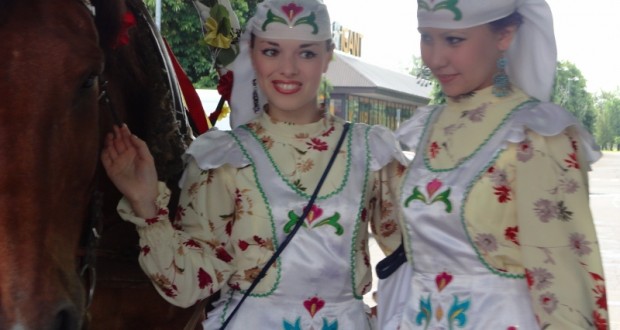 In Riga – within the program ” RIGA – European Capital of Culture 2014 “, the first European Sabantui will be held.

The idea of the First European Sabantui was announced in August 2013, at the II Forum of Tatar youth of Europe in Tallinn and supported by the Executive Committee of the World

Congress of Tatars and World forum of Tatar youth. Riga World Forum as a venue for the European Sabantui I was chosen deliberately. The Latvian capital since ancient times ha been a city with a rich cultural life , it is not surprising that it has earned the honor of being the cultural capital of Europe in 2014. Also, in 2012, Riga hosted the first forum of Tatar youth of Europe , and regularly hosts the Tatar and Bashkir holidays in Baltic countries.

Program of Tatar-Bashkir folk festival will be a pleasant surprise for everyone: Riga residents will get an opportunity to learn more their neighbors, tourists and visitors – to know

something new , and for Tatars and Bashkirs – to show the beauty and value of their native culture.

The First European Sabantuy will be attended by President of Tatarstan Rustam Minnikhanov, who is expected to arrive in Riga at the invitation of the Riga City Council and Tatars of Latvia.

What is Sabantui ? ” Saban ” in translation from the Tatar language means ” plow ” and the word ” tui ” – ” holiday” . Bashkir ” habantui .” Usually, the holyday is held after planting. The purpose of Sabantui is to preserve national cultural traditions of Tatars and Bashkirs , fostering respect for the traditions of different peoples , the development of the succession of generations . National holiday Sabantui is celebrated over a thousand years. In Latvia, the Tatars and Bashkirs have been holding Sabantui for more than 25 years.

Vermanes Garden – one of the most beautiful parks of Riga, where everyone can find a cozy sitting place. The area of Vermanes garden is 4.82 ha. Concerts are regularly are held on stage of the park, playground await children.

The organizers of the first European Sabantui are the following: Latvia Tatar-Bashkir cultural society ” Chishma ” and Tatar Youth Association in Europe. In the preparation and holding Sabantui, Tatar and Bashkir communities of Latvia, Lithuania, Estonia, Poland, Germany, Czech Republic and England take part.