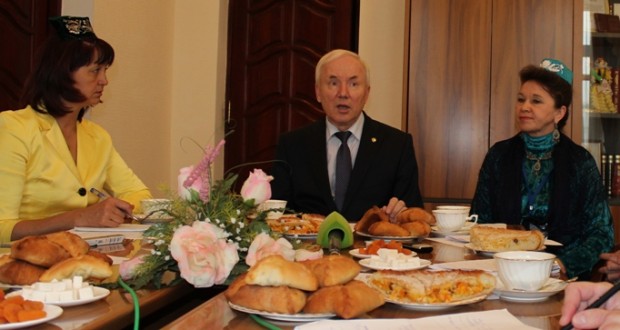 Rinat Zakirov spoke about the causes of such a forum about its expectations and plans for the future. He recalled that the previous 5-6 years ago the first forum was held and it was not so personable, an it was attended by 200-250 delegates.

Today we see that the women’s movement gained strength, besides the leadership of Tatarstan government programs for the preservation of the Tatar language , measures are being taken to develop national education. And the more noticeable became the importance of family education , the role of the mother in instilling native language, traditions and customs of the people. Kindergartens, schools , and other educational institutions can only develop and strengthen the foundations laid in the family.

Organization ” Ak kalfak ” and its current chairman Kadriya Idrissova today experiencing a new stage. The work of Tatar women associations, strengthening work of existing and creation of new field offices is reborn. And much has been done . This work resonated with the common Tatar public . In the Executive Committee of the World Congress a special department of the Tatar women’s organizations has been established. Today in 43 regions of Tatarstan departments of ” Ak kalfak ” urban RT – 6 , -56 in the Russian regions , in other countries – 8 are operating. In future, there are plans to expand its branch network.

According Rinat Zakirov , II World Forum of Tatar women should become a new type of such meetings, and to give impetus to a new type of activity. There will be planned establishment of the Public Council of 30 members, World Congress of Tatars recommends K. Idrisiva to this council. In future it is assumed that forums of Tatar women will be held annually .