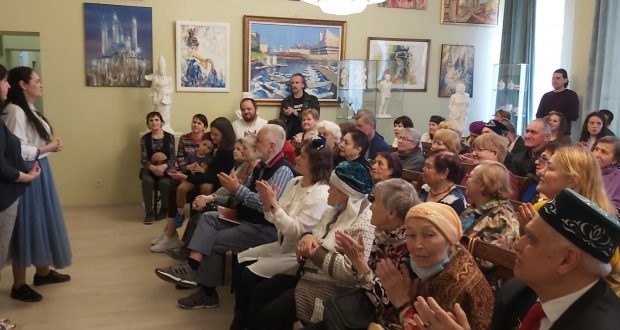 For the first time, a film about the legendary mosque “Kul Sharif. Renaissance” takes place

For the first time, a film about the legendary mosque “Kul Sharif. Renaissance”takes place

The film is a documentary film from the Ayaris Cultural Center, which tells about the construction of the Kul Sharif Cathedral Mosque, created from the memories of contemporaries – project participants: architects, builders, spiritual leaders of the republic.

On May 15, the film was shown in St. Petersburg at the Tatar Cultural Center. The film reveals little-known and exciting facts about the history of the construction of the Kul Sharif mosque, about creative decisions and reveals the mysterious pages of the revival of the pearl of the Kazan Kremlin.

The screening was held in a warm and sincere atmosphere, the filmmakers, their friends, the Tatar community and young people gathered. The hour and a half of the movie flew by. The guests saw a holistic history, from the emergence of the idea of ​​construction to its implementation. We heard from the first president of the Republic of Tatarstan, Mintimer Sharipovich Shaimiev, how difficult the political and economic situation was to implement a project of this magnitude.

Before the screening of the film, project director Tatyana Mikhailova and film director Elvira Farkhutdinova said that they did not encounter any problems while making the film, because it was a really necessary and important project. His idea was born a year ago, when an exhibition was held dedicated to the 25th anniversary of the laying of the Kul Sharif mosque. “We are lucky, we live with those who created Kul Sharif and we can hear about how the mosque was built firsthand. But it was necessary to preserve these stories for future generations, and the film did just that.”

The creators of the tape wanted to show the feelings, experiences of people, the importance of the mosque for the residents of the city. The painting, in turn, is a tribute to these people.

The invited guests and the audience gave a standing ovation after the screening of the film. The film was shown with the assistance of the Permanent Mission of the Republic of Tatarstan in the city of St. Petersburg and the Leningrad Region and the Tatar National Cultural Autonomy of St. Petersburg.