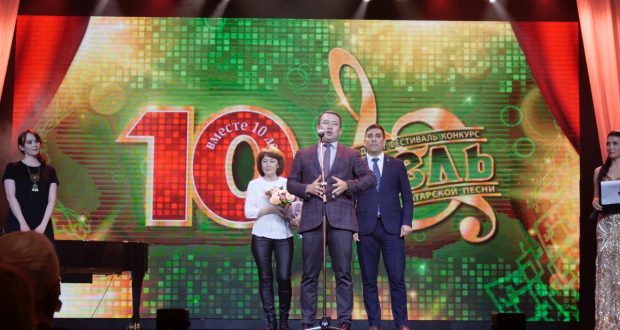 Today, on April 29, in the Tatar State Philharmonic Society named after Gabdulla Tukai, a gala concert of the International Festival-Competition of Tatar and Bashkir Songs “Idel” was held. This year the competition is being held for the 10th time. On behalf of the Deputy Prime Minister of Tatarstan, Chairman of the National Council of the World Congress of Tatars Vasil Shaikhraziev, the laureates and spectators of the gala concert were greeted by the head of the VKT Executive Committee Danis Shakirov.

“Today, when various spheres of our life, including musical art, are undergoing changes, the Idel International Festival plays an important role in preserving our national music. Festival “Idel” is a competition that helps to bring talented youth to the big stage not only in Tatarstan and Bashkortostan, but also in other regions of Russia and abroad, ”said Danis Shakirov.

Also, the participants and spectators of the festival were greeted by the Deputy Minister of Culture of the Republic of Tatarstan Damir Natfullin.

The head of  Executive Committee presented the author of the festival project, Honored Worker of Culture of the Republic of Tatarstan Lilia Badamshina, a congratulatory letter on behalf of Deputy Prime Minister of Tatarstan Vasil Shaikhraziev. In addition, at the gala concert, letters of thanks from the World Congress of Tatars were presented to the sponsors of the festival.

Let us remind you that the International Festival of Tatar and Bashkir Songs “Idel” is held with the support of the Ministry of Culture of the Russian Federation, the Ministry of Culture of the Republic of Tatarstan and the World Congress of Tatars. Professional performers with special musical education (music schools, colleges, universities), students of vocal departments of secondary educational institutions and universities, as well as vocal and vocal-instrumental ensembles can take part in the competition. The age of the participants is from 16 to 35 years old. For the title of laureate of the festival “Idel”, participants compete in the nominations: “Bashkir” or “Tatar folk song”, “Author-performer”, “Bashkir” or “Tatar pop song”, “Academic song”, “Children’s nomination”, “Best duet “and others.