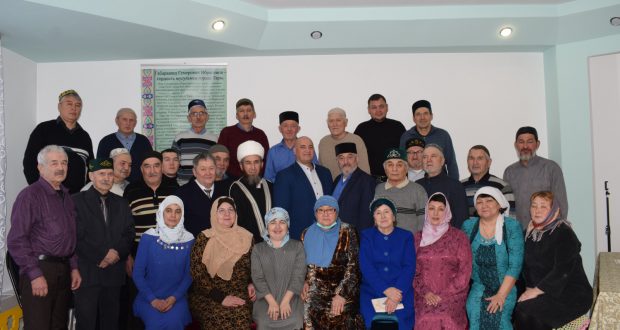 On December 25, a seminar dedicated to the 1100th anniversary of the adoption of Islam by the Volga Bulgaria and the 165th anniversary of Gabdrashid Ibragimov was held at the Ikhlas mosque in Tara. This event was attended by more than 40 participants from Tara, Omsk, Bolsherechensk cities Tevriz and Ust Ishim regions. Among them are chairmen of the Spiritual Administration of Muslims of Siberia, the Spiritual Administration of Muslims of the Omsk Region, parishioners of the mosque. The seminar was organized by Imam Radik Akhmetov.

As part of the celebration of a significant date, it was decided to hold “Ibrahimov’s readings”. Gulshat Satysheva, a methodologist of Tara House of Friendship, spoke about the life of a religious Tatar figure.

The participants of the seminar raised the issue of preserving the Tatar language. During the discussion, it was summarized that the family plays a decisive role in solving this problem.

At the end of the seminar, everyone expressed the opinion that such events should be held annually. A pleasant moment was the awarding of letters of thanks to the activists of the parishioners of the Tara mosque “Ikhlas” – “Sincerity” from the Spiritual Muslim Board of the Russian Federation Ravil Hazrat Gainutdin.