Home / News / In honor of the anniversary, the play “Bashmagym” was shown in the Tatar language in Chelyabinsk 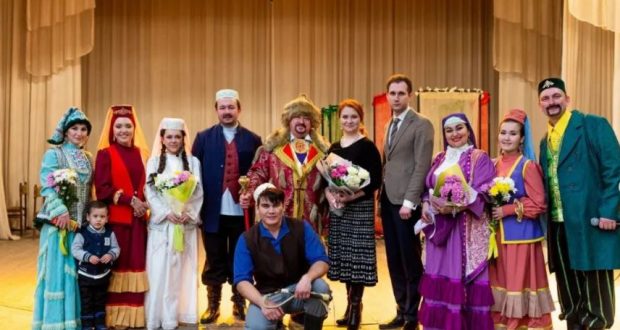 In honor of the anniversary, the play “Bashmagym” was shown in the Tatar language in Chelyabinsk

This year, the performance in the Tatar language “Bashmagym” celebrates its 80th anniversary. For the first time, the premiere of a musical comedy based on the libretto by Tazi Gizzat to the music of Jaudat Faizi took place on March 1, 1942. The musical comedy was supposed to raise the morale of the people, make viewers and listeners forget, at least for a while, about the difficult wartime.

In the early 50s, Bashmagym went beyond the borders of Tatarstan. It was first staged in Ukraine – in Kyiv and Kharkov, then the theaters of Sverdlovsk, Tashkent, Frunze, Omsk, Ulan-Ude.

The success of the comedy was repeated by the modern troupe of the Chelyabinsk Tatar folk theater.
In 2018, on the occasion of the 20th anniversary of the Congress of Tatars of the Chelyabinsk Region, on the initiative of the chairman Lena Kolesnikova, an idea appeared to revive the Chelyabinsk Tatar Folk Theater. The first theatrical production was the comedy “Bashmagym”. The troupe was headed by Eldar Gibadullin, and the well-known theatrical figure from Kazan Renat Ayupov became the director of the performance of the newly assembled team. “Bashmagym” again hit the heart of the viewer. It was watched in the native language of the Tatars in different parts of the Southern Urals, and then the performance went to Kazan for the Interregional Festival of Amateur Theater Groups “Idel Yort”, where it was recognized as the undisputed winner and awarded the Grand Prix.