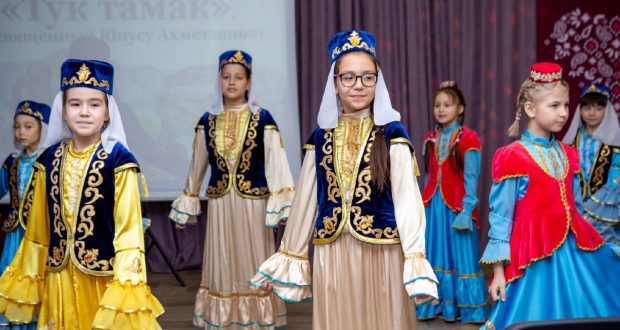 In February 2022, the Tatar culinary competition “Tuk Tamak” dedicated to Yunus Akhmetzyanov was held at the House of Tatar Culture of the Novosibirsk Region.

According to the unanimous opinion of the jury, the 1st place was taken by the dish “Zur balesh”, which was prepared by Ramazanova Zainap Minurovna. The jury highly appreciated the taste, presentation and skill of preparing this treat. The dough was thin, the filling was delicious, the dish was hot, even the broth was preserved. The recipe will be published in the Novosibirsk Tatarlary newspaper.

A festive program was held as part of the competition: the presenter spoke about Yunus Akhmetzyanov, in whose honor the holiday was held, held a quiz with the audience, the Children’s Studio of Tatar Art and members of the Duslar youth ensemble, a festive concert program was presented.

The festive event ended with a traditional tea party. Dishes scattered in an instant. There were a lot of people who wanted to eat. We are glad that this holiday interested not only the Tatars, but also representatives of other nationalities who want to get acquainted with the Tatar culture.