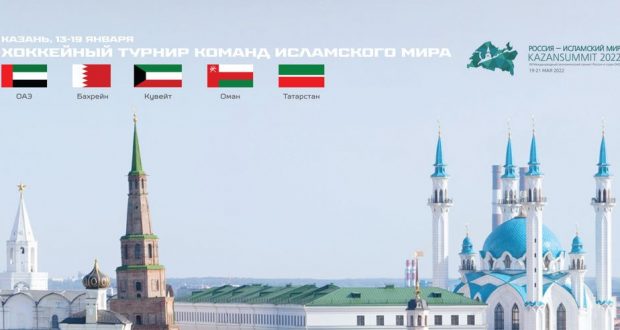 Kazan will host first ever hockey tournament among Islamic countries

From January 14 to 17, Kazan will host the first ice hockey tournament among teams of Islamic countries.

Hockey players from the UAE, Saudi Arabia, Iran, Oman, Bahrain, Kazakhstan, Turkmenistan, Uzbekistan, Kyrgyzstan, Algeria, Morocco and Lebanon will take part in it. Tatarstan will be represented by the team of the HC Ak Bars system and the hockey team of the Spiritual Administration of Muslims of the Republic of Tatarstan

The opening ceremony of the tournament will take place on January 14 at the Sports Palace at 13:00. Singers Elmira Kalimullina and Marat Yarullin will perform before the match.

On January 17th at 10:00 in the walls of the Volga Region State Academy of Physical Culture, Sport and Tourism will begin the first ever international hockey forum for muslim countries. Hockey managers from Tatarstan will share their experience on matters of hockey education, rinks operating, sports medicine and more.

On January 17, at 19:00, an all-star game will be held in Tatneft Arena. The best players from each team will face each other on the ice rink. Closing ceremony will include performances of singers Khabib and Dina Garipova and Olympic champion in figure skating Alina Zagitova.

Admission to all matches of the tournament is free.