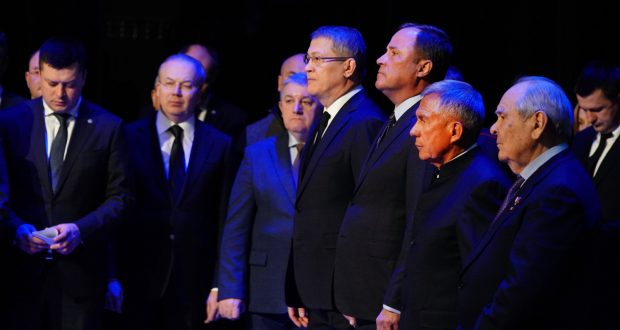 On 13 January Tatarstan President Rustam Minnikhanov and the State Counselor of the republic Mintimer Shaimiev came to Ufa to take part in a morning rally and a lying-in-state the First Bashkortostan President Murtaza Rakhimov.

Opening the morning rally, the Presidential envoy in the Volga Federal District Igor Komarov said that Murtaza Rakhimov plaid an important role in consolidation of people and did a lot for today’s Bashkortostan for transforming it into the mighty and strong region of the country. “He liked to meet people, knew their wishes and they reciprocated his feeling,” he said.

Head of Bashkortostan Radiy Khabirov said that “today we saying farewell to the great son of the Bashkir people, the outstanding state leader. We are saying farewell to a person who was the symbol of the epoch, a very difficult and complex epoch. He was the real leader”.

Tatarstan President Rustam Minnikhanov expressed deep condolences from him personally and on behalf of the republic. “We are laying to rest the first President of Bashkortostan. He was a close person for us. It is a huge loss for the country. Murtaza Rakhimov was a friend of Mintimer Shaimiev and this reflected on our close contacts”. He reminded that Murtaza Rakhimov often took part in many events held in Tatarstan, gave all his strength and knowledge for the benefit of his people and was an example for all people and the country. ”I have always felt deep respect to him”, Rutam Minnikhanov said.

Tatarstan State Councilor Mintimer Shaimiev said” We with Murtaza Gubaydullovich (Rakhimov) were always competing, were jealous of each other and argued a lot but always managed to find the common ground. And this is not always an easy thing to do”.

He also stressed that Tatars and Bashkirs are brotherly peoples, who made a big political and economic contribution into the development of Russia.

“He left the good memory in history and managed to do a lot. He made a serious contribution into political and economic development of Russia. Sometimes it did not come easily as there were years after Perestroyka. But what is most important that the administrations of Bashkortostan and Tatarstan manage to continue good traditions”, he concluded.