Home / News / “Khater kone” was held in the mosques of Tatarstan 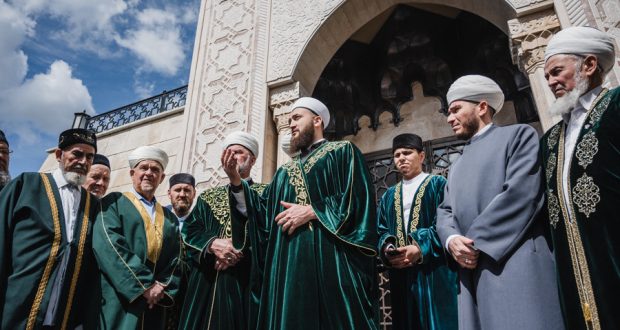 “Khater kone” was held in the mosques of Tatarstan

On the 13th of Shavval, in the mosques of the republic, on the initiative of the Council of Elders of the Spiritual Muslim Board of the Republic of Tatarstan, the traditional “Khater kone” was held. In the capital, this event was held on the largest scale in the Kul Sharif mosque, where aksakals and imam-mukhtasibs from all over Tatarstan gathered.

The Day of Remembrance in “Kul Sharif” began with a meeting of the Council of Elders of the Spiritual Muslim Board of the Republic of Tatarstan. During the meeting, Chairman of the Council Airat Hazrat Ayupov presented a report on the work done for 2021 and a work plan for the second half of 2022. Then the floor was given to the guests and respected elders. In particular, Zainsky, Buinsky, Novosheshminsky, Baltasinsky, Vysokogorsky aksakals of Tatarstan shared their experience. They spoke about the maintenance of cemeteries in their settlements, the study of the heritage of Tatar religious figures, the preservation of the Tatar language, the spiritual education of the younger generation and other important areas. As a result of the meeting, a resolution was adopted.

With the sunset, the participants of “Khater Kone” read a collective midday prayer, which was led by the mufti of Tatarstan Kamil Hazrat Samigullin. Following him, more than 100 people performed namaz in the Kul Sharif mosque. The audience then read a prayer for the repose of the soul of the President of the United Arab Emirates, Sheikh Khalifa bin Zayed Al Nahyan, who passed away yesterday.

Further, the main part of the Memorial Day was held at the mausoleum of the Kazan khans. It is noteworthy that the remains of the Kazan khans were reburied here in 2017 according to Islamic canons, thanks to the efforts of the Council of Aksakals of the Spiritual Muslim Spiritual Board of the Republic of Tatarstan. Today, Surah “Yasin” was read near the burial place, and the chairman of the Council of Aksakals, Airat Hazrat Ayupov, made a dua in memory of those who died during the fall of Kazan and all the heroes of the Tatar people who laid down their lives for the sake of religion, people and Motherland. The audience turned to the Almighty with a prayer for mercy for them.

“Khater Kone” ended with the communication of the Mufti of Tatarstan Kamil Hazrat Samigullin with journalists. He emphasized the importance of this event, explained the reasons for holding it according to the Muslim lunar calendar and recalled the upcoming 1100th anniversary of the adoption of Islam in the Volga Bulgaria, which is celebrated in Russia with the support of President Vladimir Putin. He noted that this date indicates that Muslims are the indigenous inhabitants of Russia and that Islam is the first Abrahamic religion in its territory.

“Khater kone” is held annually in the mosques of Tatarstan on the 13th day of the month Shavval at the suggestion and efforts of the Council of Elders of the Spiritual Muslim Spiritual Board of the Republic of Tatarstan.