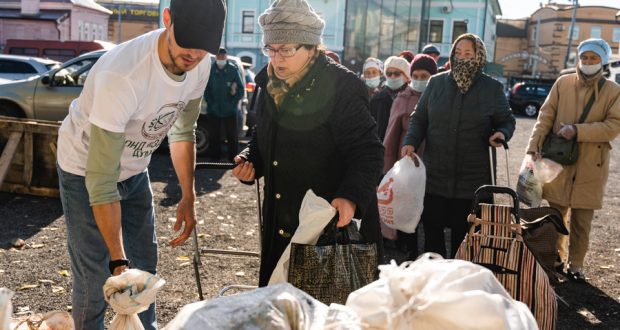 In Tatarstan, a campaign to collect gushr-sadaki and provide food to the needy strata of the population, implemented at the initiative of the Religious Board of Muslims of the Republic of Tatarstan, has ended. As a result of this initiative, 577.33 tons of gushr-sadaki were collected in the republic. Among the mukhtasibats in terms of gushr volume, the leaders are Rybno-Slobodsky (75 tons), Baltasinsky (43.5 tons) and Cheremshansky (40 tons) districts. The Pestrechinsky district (30 tons), Drozhzhanovsky district (27 tons), Sabinsky district (26 tons), Vysokogorsky, Atninsky, Kukmorsky districts (25 tons each), Mamadyshsky district (20 tons) also showed the greatest activity.

The action of food collection in favor of the needy has been carried out by the Religious  Board   of Muslims of the Republic of Tatarstan on a centralized basis every year in all mukhtasibats of the republic since 2017.
Gushr is a special kind of charity, when a Muslim must give to the poor one tenth of the harvest received during the season.

It is noteworthy that before the revolution among the Muslim Tatars, the collection of gushr-sadaki was a common practice, and in Soviet times, the gushra holidays were replaced by harvest holidays. Now this charitable collection has gradually begun to return to the religious practice of the Muslims of the republic with the ideological submission of the chief kazyi of RT, Jalil Hazrat Fazlyev, and the late religious and public figure Valiulla Hazrat Yakupov.