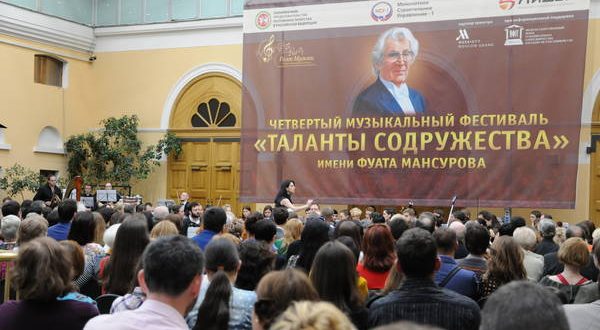 On May 25 in Moscow, the State Museum of A.S. Pushkin successfully held fourth music festival of Russia and CIS youth “Commonwealth of talents” named after Fuat Mansurov. The event is held annually with the support of the Plenipotentiary Representative of the Republic of Tatarstan in the Russian Federation.

The idea of the festival belongs to the student of maestro – Vasily Valitov, artistic director and chief conductor of the Youth Symphony Orchestra of Russia. In 2013, the establishment of the annual festival has been made possible thanks to the support and personal participation of the Deputy Prime Minister of the Republic of Tatarstan – Plenipotentiary of the Republic of Tatarstan in the Russian Federation, chairman of the festival organizing committee Ravil Ahmetshin.

Welcoming the participants, Deputy Plenipotentiary Representative of the Republic of Tatarstan in the Russian Federation Azat Akhtareev noted that the aim of the festival “Commonwealth of talents” is to support the young generation of musicians and perpetuating the name of Fuat Mansurov. “I am confident in the future, the names of many talented participants of the festival will be the well-known”, – he added.

Azat Chulpanovich handed Thanks of RT President R.N. Minnikhanov “for fruitful cooperation in the field of culture and art, many years of creative activity” musicologist, Honoured Artist of Russia and Tatarstan Svetlana Zakharova. Fuat Mansurov and Svetlana Grigorievna, having marked the recent anniversary, were linked by long-term close creative relationships and friendships.

A welcoming speech was made by Chairman of the Union of Composers of Russia, Chairman of the Union of Composers of the Republic of Tatarstan, People’s Artist of Russia and Tatarstan Rashid Kalimullin. “Fuat Shakirovich was an outstanding conductor and a man of multifaceted talent. I was lucky enough to not only communicate with him, but to work – Fuat Mansurov was the first performer of my symphonic works. I am glad that the festival to his memory has been held for several

On the evening, relatives, friends and colleagues of conductor, admirers of his talent gathered. Daughter Marina of Maestro Mansurov, his grandchildren wre present also.

The evening brought together in its program performances by young participants from Moscow, St. Petersburg, Tatarstan, Kazakhstan, Azerbaijan, Armenia, Ukraine and Serbia. Many of them this evening for the first time were accompanied by a symphony orchestra under the direction of students of F.Sh. Mansurov – conductors, honored artists of the Republic of Tatarstan Anna Gulishambarova and Basil Valitov.

The basis of the concept of the festival lays geographic wideness of creative links of Fuat Mansurov. Therefore, in his program young talents from Russia and CIS countries, having got the chance to perform, accompanied by Youth Symphony Orchestra of Russia, and to demonstrate their skills to the public. During the four years of the festival the participants and the winners were more than three dozen musicians from different specialties and ages.

The first festival was held in Moscow in May 2013, it was dedicated to the 85th anniversary of conductor Fuat Mansurov, who died in June 2010.

Fuat Mansurov – the only musician who has worked for more than 40 years, conductor of the State Academic Bolshoi Theatre of Russia. People’s Artist of Russia, Kazakhstan and Tatarstan. He was a professor at the Moscow State Conservatory. F. Mansurov died on June 12, 2010. In August 2014 the Republic of Tatarstan Troekurov cemetery a monument to the maestro was erected.

Press service of the RT Rep-office in the Russian Federation