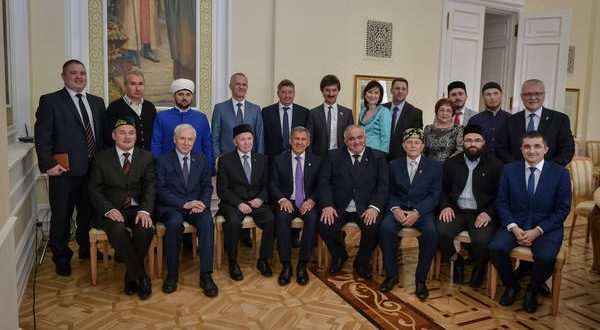 Tatarstan President Rustam Minnikhanov on a working visit to Kostroma, met with representatives of the national-cultural autonomy of Tatars. The meeting was attended by head of the region Sergei Sitnikov, chairman of the executive committee of the “World Congress of Tatars” Rinat Zakirov and the chairman of the regional national-cultural autonomy of Tatars of the Kostroma region Flun Gumerov.

Issues of preservation of the native language, culture and traditions need to pay a lot of attention, Rustam Minnikhanov emphasized. Today, we try to keep in touch with the Tatars living in Russia and abroad, he said.

Rustam Minnikhanov reminded that Tatarstan is implementing the project on-line training “Ana’s tele”, allowing anyone to learn Tatar language via the Internet. In addition, round the clock, runs a satellite channel “TNV-Planet”, which broadcasts in the Tatar language.

Separately, Tatarstan President thanked the leadership of the Kostroma region and personally governor Sergey Sitnikov for creating favorable conditions for preservation and development of Tatar culture of living on this soil.

During the meeting, Rustam Minnikhanov and Kostroma Tatars discussed the preservation of the native language, development of the traditional directions of Islam, and combating any manifestations of extremism.

Local Tatars asked also to assist in the organization of tours to Kostroma by artists from Tatarstan. Rustam Minnikhanov instructed the Executive Committee of the “World Congress of Tatars” to do with this issue, and added that Tatarstan regularly sends its creative teams to Kostroma during the holiday Sabantui.

At the end of the meeting Rustam Minnikhanov and Sergei Sitnikov took photos with activists of Tatar community of Kostroma.