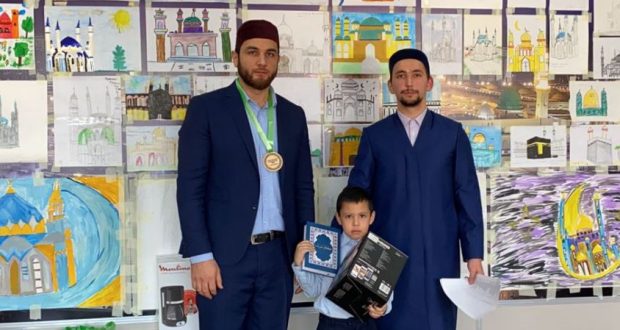 The grand opening of the year of celebration of the 1100th anniversary of the official adoption of Islam by the peoples of the Volga Bulgaria in Vladivostok began with the ceremony of summing up the results of the children’s drawing competition “Mosque through the eyes of children.” The event was initiated by the SAM of Primorsky Krai.

The interregional competition was attended by children and adolescents – boys and girls under 15 years of age. Among the participants there are children not only from the cities of Vladivostok, Ussuriisk, Artem and other settlements of the Primorsky Territory, but also young representatives from other regions of Russia, as well as from neighboring countries. A total of 100 children participated, including 70 boys and 30 girls. All contestants were divided into three age categories among boys and girls – up to 7 years old, up to 10 years old and up to 15 years old. The jury members evaluated each drawing in the following categories: content, compositional solution, image skill, expressiveness, color. The competition for young artists took place both offline and online during December 2021. Some of the works were sent by mail.

There were no “losers” in this competition. As one of the jury members said: “Each of the participants in the competition is already a winner, as he is participating in a good cause. That is why, each of the participants in the competition was awarded commemorative prizes and gifts – a participant’s medal with a picture of the majestic Kaaba – on the one hand, and the saying of the Prophet Muhammad (peace be upon him) – on the other hand, and a mini-set of a little Muslim. For girls – a scarf, a book and a sweet gift. Boys – miswak, perfume, a book and a sweet gift. For those who could not attend the summing up ceremony, prizes and gifts were sent by mail. For us, the organizers, it is very important that both children and their parents realize the enduring all-Russian and world significance of the event, which we celebrate in 2022 – the 1100th anniversary of the official adoption of Islam by the peoples of the Volga Bulgaria … ”.