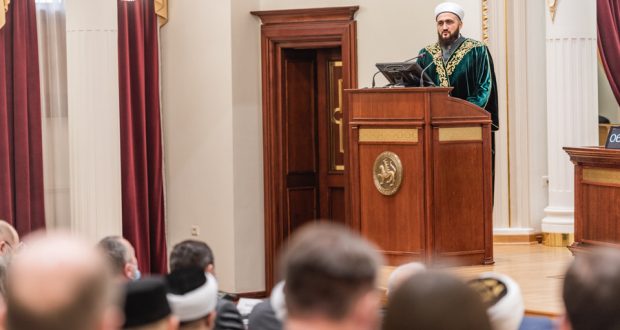 Today Kazan hosted a meeting of the Republican Organizing Committee for the preparation and holding of the celebration of the 1100th anniversary of the adoption of Islam by the Volga Bulgaria under the chairmanship of the President of the Republic of Tatarstan Rustam Minnikhanov. The meeting was also attended by Anatoly Vylegzhanin, Head of the Internal Policy Department of the Administration of the President of the Russian Federation, Olga Yarilova, Deputy Minister of Culture of the Russian Federation, Executive Secretary of the Federal Organizing Committee, Mintimer Shaimiev, Tatarstan State Advisor, Kamil Hazrat Samigullin, Mufti of Tatarstan, his Deputy for Information Policy, General director of Khuzur publishing house Rishat Khamidullin, deputy mufti for education, rector of KII and RIU, chairman of the Council for Islamic Education Rafik Muhammetshin, representatives of state authorities, the scientific community, muftis and representatives of the spiritual administrations of Muslims from 12 regions of Russia.

During the meeting, Mufti Kamil Hazrat Samigullin made a report on the plans of the Spiritual Muslim Board of the Republic of Tatarstan within the framework of the 1100th anniversary. First of all, he recalled that for Tatarstan, the celebration of the day of the adoption of Islam by the Volga Bulgaria is a good tradition – since 2010, the day of May 21 is included in the list of holidays and memorable dates by the law of the republic.
– Preparations for holding celebrations dedicated to the 1100th anniversary of the adoption of Islam by the Volga Bulgaria have been underway for several years, – he stressed. – Such tasks were set by the President of the Republic of Tatarstan, speaking with an annual message to the State Council in 2019, emphasizing that “This event played a huge role in the development of the Tatar people, the formation of Islam as one of the leading religions in Russia.”
Another reason for gratitude was the possibility of performing the Hajj for Russian Muslims, which was achieved through the efforts of Rustam Nurgalievich. Kamil Khazrat noted:
– Dear muftis! I was lucky to take part in the work of the last field meeting of the Russia-Islamic World GSF in Jeddah, and the negotiations between Rustam Nurgalievich and the Saudi authorities were going on before our eyes. We saw with what sincerity and political literacy he then defended the interests of Russian Muslims and convinced the Saudis to agree to a meeting. On behalf of all Muslims in Russia, on behalf of the muftis and religious figures who are here today, thank you, Rustam Nurgalievich!

Further, Kamil Khazrat moved on to a substantive presentation of the plans of the Religiois  Board of the Republic of Tatarstan for the implementation of activities within the framework of the 1100th anniversary. He said that the SAM RT has actually switched to the “1100th anniversary mode” since the beginning of 2021, and these developments have become the basis for the implementation of projects approved by the federal and republican Organizing Committees. Among them, for example, is the All-Russian Muslim Forum, which marked the beginning of the main anniversary events in Russia and Tatarstan and became a kind of congress of Russian Muslims on the Itil River. “We ran the forum successfully. And now we have to organize the All-Russian Forum of Muslim Youth within the framework of the 1100th anniversary,” the mufti said.