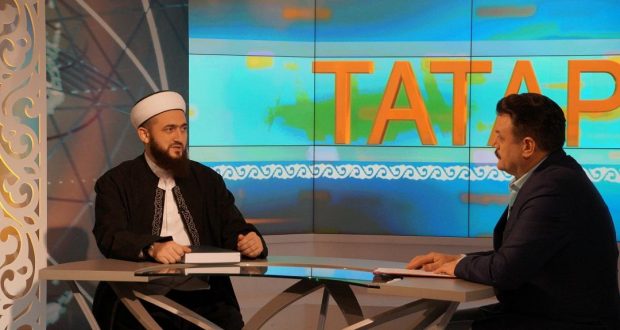 Mufti of Tatarstan became a guest of the  program «Tatarlar»

Today,  head of the Muslims of Tatarstan, Kamil Khazrat Samigullin, took part in the «Tatarlar»  program on the Tatarstan-New Century TV channel (TNV). During a conversation with the author and presenter of the television program, Ildar Kiyamov, the mufti spoke about the recently published publication “Kulam Shurif. Mәgynәvi tәrҗemә ”and the multifaceted activities of the DUM RT.

From the first minutes of the conversation, it was a issue  of translating  meanings of the Koran into the Tatar language, published by the DUM of the Republic of Tatarstan  the other day. Kamil Hazrat said that this serious work was very warmly and enthusiastically received at a presentation in Moscow:

“We wanted to hear a look from the outside about this work, so we decided to introduce it in the capital of Russia,” Hazrat explained. – Philologists, connoisseurs of fiqh, akydy, Tatar, Russian and Arabic languages, specialists in kiraats, Quran-hafizas worked on the book. All of them worked on translation within their competencies. As a result, the verses and individual words were translated taking into account the general context of the Qur’an. After what event were the ayats sent down? Where and when? For what purpose? How many semantic translations does one or another Arabic word have? In translation, all this had to be taken into account. Therefore, it is objective that one person cannot prepare a meaningful tafsir in terms of meaning. It can be performed only by a number of specialists. ”

At the end of the topic of work on tafsir, the mufti concluded:

“The most perfect book is the Holy Quran. Our work is also imperfect, there may be mistakes, so I urge you to improve it with us. ”