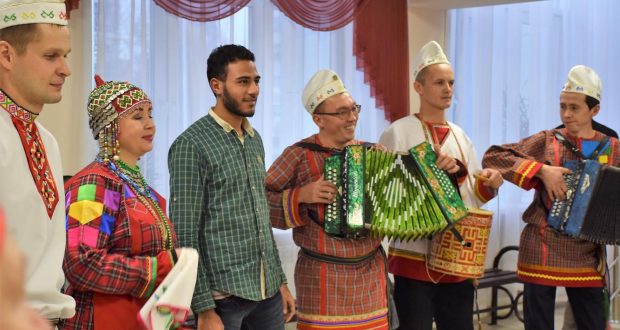 On the eve of the young Russian holiday of National Unity Day, the VI Republican Festival of National Cultures “United Family of the Peoples of Russia” starts at the House of Friendship of Peoples.

The holiday will bring together people of different nationalities and religions under one roof.

The organizer of the event, aimed at ethnic unity and rallying  peoples living in multinational Chuvashia, is the House of Friendship with the support of the Ministry of Culture of Chuvashia.

The program includes a photo exhibition dedicated to the activities of the House of Friendship of Peoples of Chuvashia, an exhibition of arts and crafts, folk crafts, as well as an exposition of student works from different years of the graduation of the Faculty of Art and Graphics of ChPPU named after I. Yakovlev “Space. Design”. It is dedicated to the 60th anniversary of the faculty of one of the leading universities of the republic and the 100th anniversary of the Chuvash autonomy.

The concert program will be decorated with performances by amateur creative groups of the city and the republic, the House of Friendship of the Peoples of Chuvashia, and national and cultural associations of the region.

We invite everyone to November 4 at 11.30 at the VI Republican Festival of National Cultures “One Family of the Peoples of Russia”.