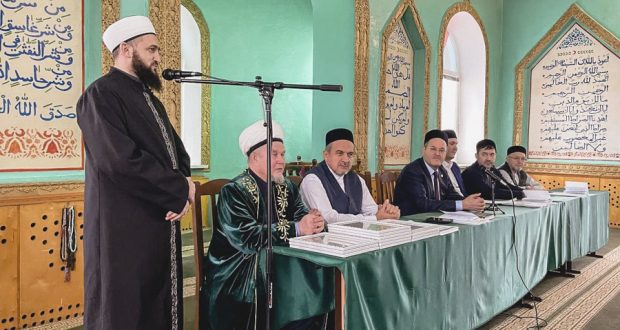 On December 15, the mufti of Tatarstan Kamil khazrat Samigullin made a working trip to the Baltasi mukhtasibat. Here, in the Baltasin Central Mosque, a meeting of district imams took place, dedicated to the results of activities in 2021.
The meeting was opened by the chief kazy of Tatarstan, imam-mukhtasib of the Baltasi region, Jalil hazrat Fazlyev, who spoke about the work of the imams of the region, the main results of the outgoing year, tasks for the coming year, in particular, plans to celebrate the 1100th anniversary of the adoption of Islam in Volga Bulgaria.

Then the Mufti of Tatarstan Kamil khazrat Samigullin spoke with words of welcome and instructions. He spoke about the importance of constantly improving knowledge, especially in the field of studying the Qur’an. He urged imams to be attentive when reciting suras in collective prayers. Then the head of the Muslims of Tatarstan handed certificates of the right to conduct religious activities to 44 Khazrats serving in the mosques of the Baltasinsky region. Now this document is issued to the imams of the DUM RT every four years.

The meeting was also attended by the head of the madrasah named after the 1000th anniversary of the adoption of Islam Ilyas Hazrat Ziganshin, the head of the Baltasinsky municipal district Ramil Notfullin, the imam-muhtasibs of the Northern Kazyat of Tatarstan, sponsors.