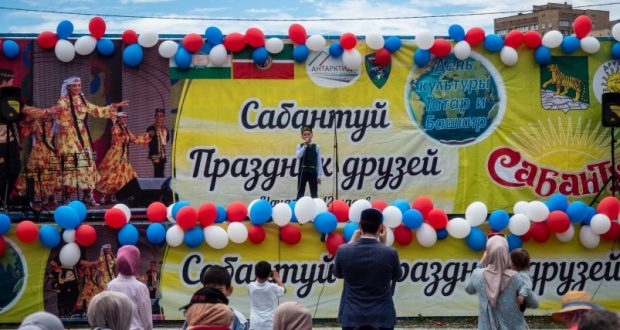 National holiday of Tatars and Bashkirs “Sabantuy” celebrated in Vladivostok

The Sabantuy-2022 (0+) holiday in Vladivostok this year has become truly international, bringing together not only Tatars and Bashkirs, but also representatives of other national cultural associations from all over the region. The organizer of the holiday in the park of the Mine Town on Saturday, June 25, was the Vladivostok Tatar-Bashkir public organization “Duslyk” (“Friendship”) with grant support from the administration of the city of Vladivostok, RIA Prima-Media reports.

A concert of national-cultural associations from all over Primorye took place for the guests of “Sabantuy” in the park of the Mine Town, various sports and entertainment games were held, in particular, competitions in the national wrestling kuresh were spectacular. The visiting exhibition “Ethno Museum of Tatar and Bashkir Culture and Tradition”, which was previously created at the expense of the Presidential Grants Fund, was shown in a colorful way and continues to be developed. As part of this exhibition, a real Bashkir yurt was deployed on the territory of the holiday. It presented household items, national clothes and much more.

“Sabantuy” was opened by the chairman of the Vladivostok Tatar-Bashkir public organization “Duslyk” (“Friendship”) Takhir Ibashev. Congratulating all the participants of the international holiday, he noted that in the Primorsky Territory “Sabantuy” was held for the 30th time, and in Vladivostok for the 10th time.

Roman Makatrov, Acting Head of the Department for the Implementation of Public Projects of the Office of the Plenipotentiary of the Far Eastern Federal District, also congratulated the guests and participants of Sabantuy. He wished everyone prosperity, success, new ideas and projects that contribute to the prosperity and development of the Far East.

“Sabantuy” is one of the brightest holidays. It symbolizes the continuity of the past, present and future, personifying the ideals of peace, goodness and harmony. I note that more than 15.5 thousand representatives of Tatars and Bashkirs live in Primorsky Krai. Today’s holiday is also notable for the fact that it is part of a social project that is being implemented by the Duslyk public organization together with the mayor’s office of the city of Vladivostok as part of grant support, which is an excellent example of a developed civil society. And a strong state is impossible without a strong civil society,” said Roman Makatrov.