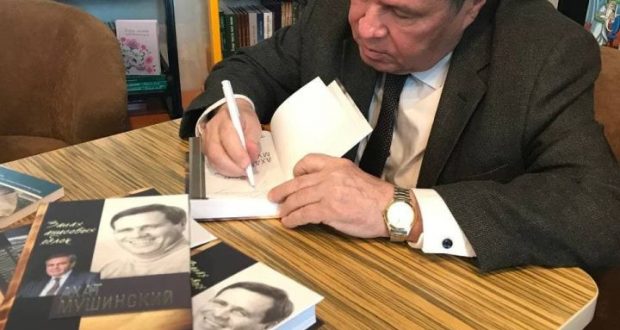 Today a presentation of a new book by the famous Russian writer Akhat Mushinsky took place at the Tatmedia Literary Cafe. As part of the presentation “The Smell of Aniseed Apples”, the writer held an autograph session.

Akhat Mushinsky’s new book “The Smell of Aniseed Apples” is a collection of works written in different genres. These are essays about colleagues and fellow writers, such as Vasily Aksenov and Tufan Minullin, these are works for children, as well as maxims and aphorisms.

Close friends and colleagues of Akhat Mushinsky in the creative department came to the presentation at the Literary Cafe.

Each of the guests expressed gratitude to Mushinsky not only for his writing talent: Akhat Khayevich is known, in addition to his work, also for the fact that at one time for many novice writers who have become famous today, he acted as a mentor.

“Akhat Khaevich is a talented writer who opened the way for many creative people. He has always been a supporter of supporting young people. That is why Akhat Mushinsky once initiated the creation of such a magazine as Idel – a creative platform for novice Tatar poets and writers, ”historian and publicist Bulat Khamidullin noted during the presentation.

Akhat Mushinsky is a man with many well-deserved regalia and titles.

In addition to the fact that Mushinsky is engaged in writing, he actively acts in the publicistic field as the chief editor of the Kazan Almanac, heads the Tatar PEN Center.

Mushinsky – Honored Art Worker of the Republic of Tatarstan, laureate of the International Prize named after Derzhavin and the Children’s Literary Prize of Russia “Cherished Dream”.