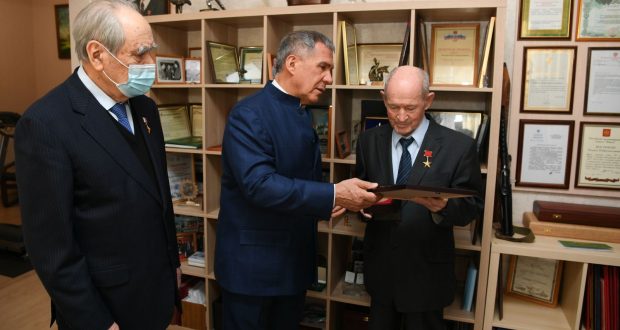 Design scientist Ildus Shaikhulislamovich Mostyukov was born in Kazan in 1928. He graduated from the radio engineering faculty of KAI and in 1955 got a job at the Kazan OKB-294. He was engaged in the study of the work of aviation technology and  development of special tools and systems for aviation. In 1980, he was awarded the title of Hero of Socialist Labor for  creation of a unified state combined-arms radar identification system. Ildus Mostyukov is one of the founders of the “friend or foe” identification system.

Rustam Minnikhanov congratulated Ildus Mostyukov on the Day of Heroes of the Fatherland, noting his great contribution to strengthening the country’s defense capability. Then  President of the Republic of Tatarstan presented the Hero of Socialist Labor with an anniversary medal in honor of the 75th anniversary of the Victory. The award was established by  Decree of the President of the Russian Federation Vladimir Putin. Also, Ildus Mostyukov was awarded  Commendation of  the President of Tatarstan.

It is worth noting that today Rustam Minnikhanov signed a decree on awarding medals “100 years of the formation of the Tatar Autonomous Soviet Socialist Republic” to Heroes of Socialist Labor, full holders of the Order of Labor Glory and Hero of the Russian Federation for a significant contribution to the socio-economic development of the Republic of Tatarstan and   active public activity.