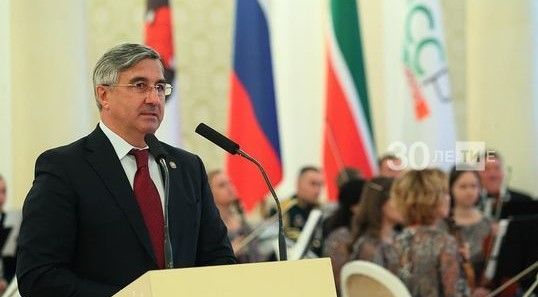 Vasil Shaikhraziev: “Every feat is pride”

A solemn event dedicated to the Day of Heroes of  Fatherland took place today in the building of the Kazan City Hall. This is a holiday that went down in the history of memorable dates in Russia recently – in 2007. Gathered at the meeting heroes – natives of Tatarstan, as well as the descendants of the fallen soldiers from our republic were greeted by Deputy Prime Minister of the Republic of Tatarstan, Chairman of the National Council of the World Congress of Tatars Vasil Shaikhraziev.

“On the one hand, this holiday is new, but, on the other hand, its history in Russia is long. The titles of Hero of the Soviet Union, Hero of the Russian Federation, Hero of Socialist Labor of the Soviet Union, Hero of Labor of the Russian Federation, full knight of the Orders of Glory, full knight of the Order of Labor Glory are the highest awards of our country. Each feat is pride and our history, ”said  Vice Prime Minister of the Republic of Tatarstan.

The speaker noted that the year of the 75th anniversary of the Great Victory and the 100th anniversary of the formation of the TASSR has become significant for the republic. Despite the pandemic, the President of the Republic of Tatarstan  made a decision to hold  Victory Parade at the highest level in compliance with  necessary security measures. The republic showed the whole world that people here respect the feat accomplished by  Soviet soldiers.

“Unfortunately, we celebrate this Day of Heroes of  Fatherland without Boris Kirillovich Kuznetsov. The entire republic in a solemn atmosphere saw off our last Hero of the Soviet Union, a participant in the Great Patriotic War with all the honors, “said Vasil Shaikhraziev.

Those present were congratulated by  chairman of the Regional public organization of veterans (pensioners) of the Republic of Tatarstan Khabir Ishtiryakov. He noted that this holiday makes everyone think about how courageous our people are.

Chairman of the public charitable organization “Heroes of Tatarstan”, Hero of the Russian Federation Gazinur Khairullin spoke to the participants of the meeting. Gazinur Garifzyanovich is the pilot of the legendary crew, who repeated the feat of Mikhail Devyatayev 51 years later, having made a heroic escape from Afghan captivity in full force. He thanked all the people gathered at the event, as well as the leadership of the republic for  warm attitude and support of the veterans.