Home / News / Rimzil VALEEV: “Slander against Tatarstan aims to arrange maidan by us” 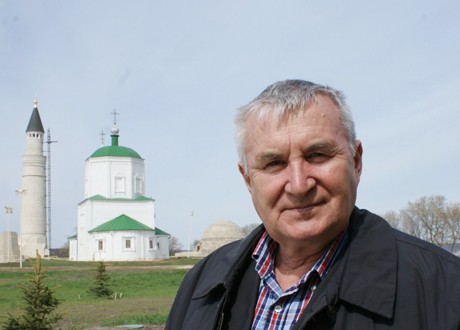 Rimzil VALEEV: “Slander against Tatarstan aims to arrange maidan by us”

HOW  I BECAME A “DINOSAUR ”

Usually the attacks in the press, on the Internet and social networks  are  commonly  not   reacted, get  offended,  entered  into discussions with opponents. Only occasionally  some   go to court and seek a refutation, demand compensation for moral damage   by certain amount. But best of all such things  are not paid  attention. Much honor to  cast pearls   before  and so on … 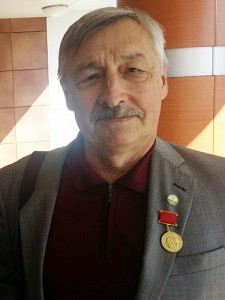 But I still decided to protest an article in which I  and academician Rafael Khakimov  named  “dinosaurs”.

The monicker   is not very hurtful, even respectful. The kids love dinosaurs, big and strong, scary, cute and … non-hazardous. The author would like to be sarcastic about the inadequacy of our thoughts and ours to his ultra-modern ideas, up to now are  still not known to the general public. He is somehow  smarter and more progressive than  online publication “Business Online», which is daily visited by thousands of people, as well as abundantly quoted in other media in the vast Russian Federation and abroad. I assume  that  these figures are comparable to the rating of individual sections of Regnum. One has to answer before  such an audience,  be responsible for   for his word, present  arguments.

The publication signed  by  Ayrat Galimzyanov  says the following: “… Take, for example, rapidly gaining in rating online newspaper” Business Online », which claims  the title of” newspaper for business people “now turns into   a mouth-piece of  ethnocracy. To implement this aim,  from the dusty vaults   two “dinosaurs” of  Tatar nationalism of the 1990s: the ideologue of Tatarstan’s sovereignty Rafael Khakimov and former chief editor of the Kazan bureau of Radio “Liberty” (“Azatlyk”) Rimzil Valeev   have been extracted to the light of the day. The both, weekly,  compose essays, where both, as befits a “pique vests” are  reasoning  when and why, finally, the collapse of Russia would  happen,   and Tatarstan  ” declares  a free city.”

Pretty unloosened  statement, isn’t  it? Well, if in someone’s LJ or  fascist site would speak  like this,   it is possible  somehow tp grasp the level of lawlessness. I said nothing, when Kazan Bureau of  American radio “Azatlyk” cut to get rid of me for provocative  “pro-Russian” orientation that did not suit the hosts. Then, on the site of radical nationalists have depicted a caricature: a Russian officer in his uniform with a star hero from  the wall of the Moscow Kremlin raised his fist at Uncle Sam. And other labels I  had to wear. Not surprising.

But now from such an  official grandstand how to crush  the enemies of Russia? This is too much. I decided to answer. Still, the agency Regnum – not any  a bunch of skinheads, but a solid federal edition. I think one of those maintained  includingfrom   my taxes and for the account of the Republic of Tatarstan, where each year are  transferred   hundreds of billions to  the federal treasury, what  is several times larger than the budget of the republic. Having looked  the  site regnum.ru, we can see that this is a whole media empire! It performs probably important tasks and is associated with serious circles. Yet the publication of Tatarstan and the Tatars are not differed  with love for the truth and do not breathe   with care   for the welfare of the republic. On the contrary …

Say, political technology,  the era of PR, in the framework of the campaign is not yet all what is thown,  beginning  from rotten tomatoes and eggs. Big politicians  are right, do not attaching value,   not   to  advertise the writers of anonymous letters.

But I’m a normal citizen, a veteran journalist, who had  no  serious  rebukes  for  48 years of professional work. From the same generation of idealists, who have kept in souls  and in  minds   such notions as “honor”, “dignity”. I do not know  how the things are  regarding  this aspect with  “political scientists” who    had mislead a well-known federal agency.

There is such a fashion: using   the names or persons of Tatar nationality as a defender of “disadvantaged” Russians   and Russia as a whole. No  political scientist   Ayrat Galimzyanov could not be found. Only one “Islamic scholar” Rais Suleimanov “exposes” in national bias and disreputable ties with weird types, the foreign radio, the Tatar movement of decent people. It does not matter whether there his lookalike  appeared  or  he himself under the Tatar   name  elevates me … to the rank of national heroes. Another would be happy, basked in the glory and would walk as  the Savior of the whole ethnic group. Some  for the sake of this would  sit in jail, if not for long. And I do not want such fame of   Tatar interests   champion. No, thank you!

But the hottest saviors of my people   are unlikely to yield to us with Rafael Khakimov a leadership T-shirt. They also accuse us of blood ties with the government, in walking along the trails of the Kremlin (Moscow and Kazan Kremlin). And not without reason: Rafael Sibgatovich for 17 years, has been  an adviser to President M. Shaimiev, he is known in Russia and in the world as an intelligent politician and historian. Never criminal case launched,   he  created a whole institution, organized the publication  seven volumes of  “History of the Tartars.” My  merits  are  not so  loud, but also not borne yesterday. In Kazan, I  appeared  as a “misdirected hand of Moscow” and worked as a correspondent for the popular newspaper “Komsomolskaya Pravda”, which we are under the guidance of then chief editor Gennady Seleznev (now known as a long-term chairman of the State Duma)  brought  circulation  to  21 millions.    I am  marked  “soaked”  in  the party line.  I was a correspondent of the newspaper of the Central Committee of the CPSU “Soviet Culture” and had regular “beat ” local officials. Moreover, I confess    another defamatory connection: I  worked in the ideological department of the Tatar Regional Committee of the CPSU,  issued in two languages, with a total circulation of 10 thousand copies. Official editor of “perestroika” edition (how we did it) was known as  deputy and vice-speaker of the State Duma Oleg Morozov.   He recently published his article, written for the 7th volume of the “Tatar Encyclopedia”, where he talks about the most important of the perestroika years at the time of the ideological department, headed by the regional committee.

Someone  like  Oleg has the right to speak  about the hot events of national revival in Tatarstan, which affected the events nationwide scale. In his article for the final volume of the “History of the Tatars” he writes about the events of the 90s: “At first roles    there were my colleagues from the university,  associate professors – Vasily Likhachev and Andrei Gagarin. In the end,  he  managed to gather a cohesive team of associates, consisting of a whole constellation now known in the country and Tatarstan people. It included Rafael Khakimov, Nail Khusnutdinov Alexander Yurtaev, Georgy Isayev, Rimzil Valeev  … “The above associates  of  Oleg Viktorovich fo  not need additional  checks. Khakimov – academician, political scientist and historian, expert of  nationwide (at least) level. Alexander Yurtaev unfortunately already deceased, headed l information-analytical department of the government, which  for 12 years had been led    by Rustam Minnikhanov. Georgi  Isaev – Doctor of Sociology, Advisor to the Chairman of the State Council Farid Mukhametshin.  Nail Khusnutdinov led State Republican TV “Tatarstan”, was a deputy of the State Duma of the Russian Federation, is known as an honest and conscientious manager. Good company, does not it?

The author of these memoirs  is O. Morozov – a person verified  at the federal level as deputy and vice-speaker of the State Duma of the Russian Federation, and now he leads the management of the internal policy of the Presidential Administration. Passing  of the joint tests with such a person can be considered as a very strong run-in in the field of strengthening the foundations of the state and the creative application of  knowledge and experience in the most difficult alterations. In short,   our career will not to be  spoiled. Lampoon from  persons of a particular grade adds nothing new to our portraits. But to call the Republican Agency and holding “Tatmedia” organizer of a kind of “sabotage”  structure – it’s something new and provoked   by nothing  invention.

WHAT HAS GOT  TATARSTAN?

Frankly, I do not understand delights  of  post-modern political strategies. How  is possible from  state  canons  to fire your  country, regions and decent people. Here I am,  a normal citizen and journalist. For 48 years of journalistic practice I  had no any  complaints  against myself,  cheated   no one, did not lie,    there could only be a technical error. Even with the best intentions in the name of high slogans  it is impossible to smear person with impunity to  slander him. Unmotivated persecution and harassment of human organization and a separate ethnic groups   should be regarded as a gross violation of their rights,  undermining of the constitutional foundations of the Russian state.

Why would I, an employee of the information structure of the World Congress of Tatars, one of the organizers and leaders registered with the Ministry of Justice  official Tatar ethno-cultural organizations, not to defend the interests of my  people, not to explain  history and culture of the Tatars? Where is the criminal element or malevolent and unethical behavior?

Everything with   our generation perestroika -statists  is  clear. Not everything is clear with the reasons and evidence base of Ayrat Galimzyanov   and that fellow who closes   by  his name his  true face. Although authorship and style are viewed very easily. And   his  “unmasking” is  not new.  I deliberately turned on   internet  searching for  one author,  who  is spinning  the ethnic themes in Tatarstan. Internet search has   found more than a hundred articles   by  Rais Suleimanov,  exposing Tatarstan and published in  REGNUM.RU.

Never before have   seen   a dirt  in such  extent  piled on the face of a federal subject. The best in Russia. You  understand anything ? Me  –  do not.

Intrigue is   great: maybe the author  would  cite the place where we  in  duo argue, ” when and why, finally, the collapse of Russia and Tatarstan happens”   announce a free city, “or at least in the retelling,  by a hint of something like that said. Undermining  constitutional foundations, the call to dismantle the country fraught with criminal prosecution, therefore should  facts must be presented  or   keep mouth  shut.  It is too  delicate  material – national relations, the interests of different ethnic groups and the government at various levels. In Ukraine rocked the theme “Muskali” and finished badly so that they can not  currently  stop. You’ve got to be more careful, more precisely.

Here is another “trick” from the text of the same publication. “Politician” Ayrat or pocket writer wrote: “… Our Tatar Ethnocracy (which is why the author has chosen the Tatar name!) Tries to pursue its ” general line “, masking it under” alternative view “and an objective view of the situation. At the heart of this line is still the same national separatism, only this time not in a straightforward manner …  but  softer. ”

To test such a dashing version, you would have to run at least a simple social  study, to involve experts from different sides. And in order not to make the explosion of national suspicion, not to rush to publication,  but  to consider involving lawyers and ethnologists. This requires systematic monitoring. By the way, just the other day in Kazan was a great forum with the best experts from Moscow and 34 regions. Participants of the All-Russian scientific and practical conference “The positive experience of monitoring and regulation of ethno-social and ethno-cultural processes in the regions of the Russian Federation,” praised the experience of Tatarstan  in national issues. Nothing  about  ethnocratic manners of our authorities  has been said.