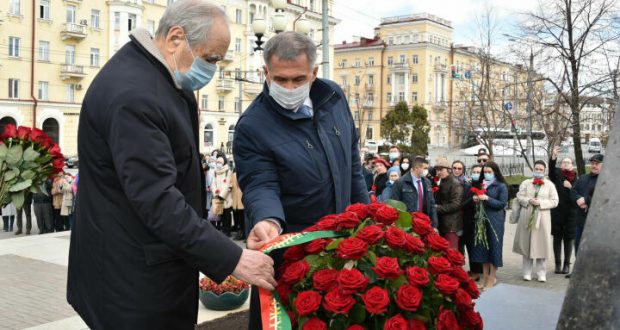 President of Tatarstan Rustam Minnikhanov and State Councilor of the Republic of Tatarstan Mintimer Shaimiev on the jubilee 153rd birthday of the classic of Tatar literature Gabdulla Tukai laid flowers at the poet’s monument in Kazan.

Also, the memory of the poet was honored by  deputies of the State Council of the Republic of Tatarstan, cultural and art workers, creative intelligentsia and schoolchildren.

“Today is Mother Language Day. When we speak   about it, first of all we remember Gabdulla Tukay. If we want to instill in young people a love of language and culture, then we need to rely on personalities, ”said Deputy Minister of Culture of the Republic of Tatarstan Damir Natfullin.

He stressed that Tukai is not the only one among the prominent writers and cultural figures, but certainly the number one for the Tatar people.

Schoolchildren, who also came to lay flowers at the poet’s monument, also noted that Gabdulla Tukai is one of the key figures in Tatar culture.

“Tatar literature has always been associated with Gablulla Tukai. In addition, no poetry contest takes place without his works. Everyone knows and reads his poems, ”said one of the young people.