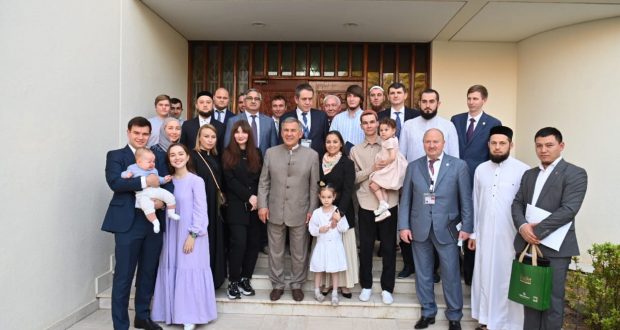 At the Consulate General of Russia in Jeddah, President of Tatarstan R.N. Minnikhanov held a meeting with compatriots living in the Kingdom of Saudi Arabia. The meeting was moderated by Deputy Prime Minister of the Republic of Tatarstan, Chairman of the National Council of the World Congress of Tatars V.G. Shaikhraziev. The event was held with the participation of Sergey Kozlov, Ambassador Extraordinary and Plenipotentiary of Russia to Saudi Arabia.

Currently, about 200 Tatars live in Saudi Arabia, most of them are settled in the cities of Riyadh, Jubeyl, Dammam, Jeddah, Medina, etc. Practically all of them are representatives of the new wave of emigration, except for a few families living in Medina.

The meeting with Rustam Minnikhanov was attended by the Ikhsanov family from the city of Khubar, a postgraduate student at the University of Oil and Mineral Resources named after King Fakhd A.A. Miftahutdinov (Dakhran), Head of the Quality Control Department of Ai-Plast Saudi (in Nizhnekamsk, Ai-Plast LLC) Sh.I. Sitdikov (city of Jubeil).

Tatars who go to work or study in the Kingdom of Saudi Arabia, once abroad, seek to maintain contacts with local Tatars. In 2020, our active compatriots began to work to rally the Tatars living in the KSA, a group was created in the Whatsapp messenger, and online meetings were organized. In the near future, the Tatars of Saudi Arabia are planning to create a Tatar society in order to preserve their national identity, the Tatar language and pass it on to the younger generation.