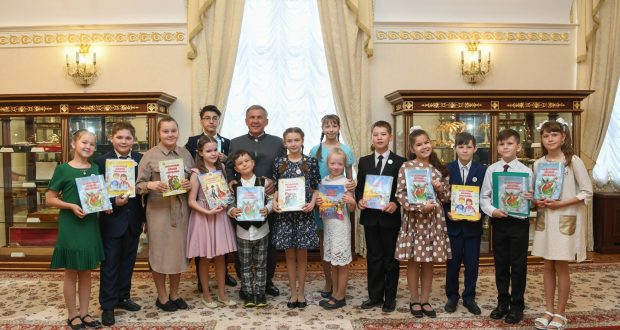 The President of the Republic of Tatarstan Rustam Minnikhanov met with the winners of the republican cultural and educational project “Cultural Diary of a Schoolchild”.

The event took place in the Kazan Kremlin.

During the meeting, Rustam Minnikhanov congratulated all the participants on the International Children’s Day.

He also noted that the project “Cultural Diary of a Schoolchild” provides an opportunity to study the richest culture of our republic, to find new friends.

Rustam Minnikhanov conducted an excursion around the Kazan Kremlin for the winners of the project. The guests looked into the office of the President of Tatarstan, looked at what is on the desk of the head of the republic and studied the numerous photographs on the shelves.

The children also asked who Rustam Minnikhanov wanted to be as a child.

The schoolchildren – the winners of the project, in turn, greeted the President of the Republic of Tatarstan in their native languages ​​- Russian, Tatar, Mari, Chuvash.

The children presented Rustam Minnikhanov with a gift – a book-album with the wishes and reviews of the participants of the “Schoolchild’s Cultural Diary” project.

We  remind you that this year more than 200 thousand children took part in the project “Cultural Diary of a Schoolchild”.

The diary itself is a colorful travel guidebook with stories about the sights of Tatarstan, museums, libraries and theaters. During the academic year, schoolchildren made out the pages of the diary, completed the proposed tasks and at the same time made notes about visits to museums, theaters, libraries and other cultural institutions.

In 2014, 40 thousand first-graders of Tatarstan received the “Pupil’s Cultural Diary”. Since 2015, the project has been extended to the entire primary school of the republic (grades 1–4). A mass specialized children’s social network of cultural orientation has been created in Tatarstan – www.kulturnyydnevnik.rf. Here, schoolchildren exchange the results of visiting museums, theaters, libraries, cultural events, learn about cultural events and participate in children’s cultural and educational competitions.