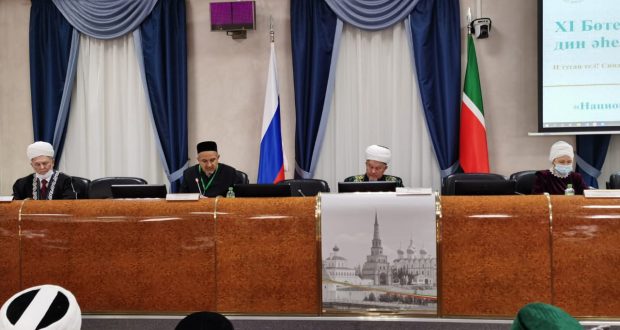 The XI All-Russian Forum of Tatar Religious Figures “National Life and Religion” has started in Kazan. Today, on the first day of the forum, the imams worked at 4 discussion platforms. The discussion platform “Issues of studying the spiritual heritage of the Tatar people” was held at the Ministry of Culture of the Republic of Tatarstan. The event was moderated by  director of the Kazan Higher Muslim Madrasah named after the 1000th anniversary of the adoption of Islam, Ilyas Hazrat Ziganshin.

Traditionally, the work of the forum began with  reading of the suras of the Koran. Then the main kazy of the Republic of Tatarstan, imam-mukhtasib of the Baltasinsky region Jalil hazrat Fazlyev,  mufti of the Khanty-Mansiysk Autonomous Okrug Tagir hazrat Samatov, the chairman of the Spiritual Directorate of Muslims of Nizhny Novgorod Gayaz hazrat Zakirov,  chairman of the Regional Public Organization of Tatar Women “Akdrisov” Kadriya I , Deputy Director for Scientific and Methodological Work of the National Library of the Republic of Tatarstan Irek Khadeev, Candidate of Philology, Senior Researcher at the Institute of History named after Sh. Mardzhani employee Aydar Gainutdinov, candidate of historical sciences Rafik khazrat Nasyrov and others.

Most of the speeches at the discussion platform were devoted to the study of epigraphic monuments. To date, a lot of work has been done in Atninsky, Vysokogorsky, Kukmorsky, Agryzsky, Sabinsky, Baltasinsky, Yelabuzhsky, Arsky, Chistopolsky, Mamadyshsky, Mendeleevsky and other regions of Tatarstan. As can be seen from the speeches, the most ancient gravestones on the territory of Tatarstan belong to the Golden Horde period. Most of the monuments date back to the late 19th – early 20th centuries.