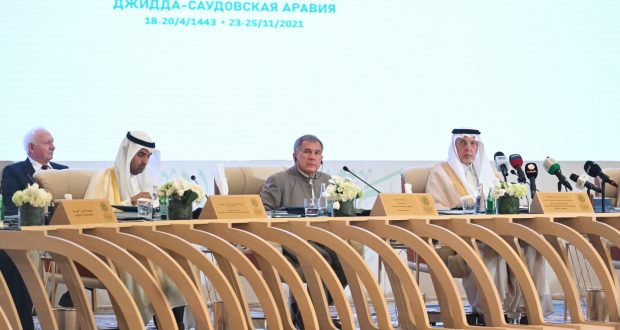 The meeting is chaired by the head of the Russia-Islamic World Strategic Vision Group – President of the Republic of Tatarstan Rustam Minnikhanov.

Opening the plenary part of the meeting, Rustam Minnikhanov read out a greeting to the meeting participants, which was sent by the President of the Russian Federation Vladimir Putin.

“I greet you on the occasion of the opening of the next meeting of the Strategic Vision Group“ Russia – Islamic World ”, which this time is being held in Saudi Arabia – on the land that is the birthplace of Islam.

I would like to sincerely thank the Guardian of the Two Holy Places His Majesty King Salman Ben Abdel Aziz Al Saud for the personal attention shown to the organization of this meeting.

Russia attaches great importance to the development of friendly ties with Muslim countries, both bilaterally and within the framework of a dialogue with the Organization of Islamic Cooperation.

It is important that our positions on many topical issues of the regional and global agenda are very close.

Together we stand for building a just democratic world order based on the rule of law and peaceful coexistence of states, free from dictatorship and any form of discrimination.

The agenda of the Group’s meeting is, as always, very busy. It is necessary to discuss ways of interaction in the settlement of regional conflicts and crises, in the fight against the threats of international terrorism and extremism.

The problems of cooperation in trade, economic, scientific and technical, humanitarian and other spheres deserve serious attention.

I hope that your joint work will be constructive and fruitful and will serve to strengthen mutual understanding and trust between the peoples of our countries.

I wish you success and all the best, ”reads the text of the greeting of the President of the Russian Federation Vladimir Putin.