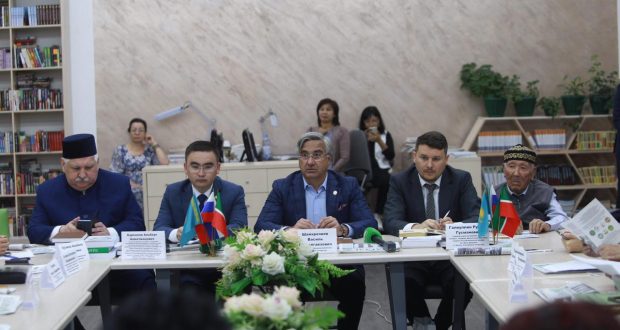 The Chairman of the National Council expressed his gratitude to the akim of the Abai region Nurlan Urankhaev, because it was on his initiative and on the initiative of the President of the Republic of Tatarstan Rustam Minnikhanov that a decision was made to hold the I Priirtysh Sabantuy.

– As part of the World Congress of Tatars, a committee for working with Tatar local historians has been working for a long time. Such conferences, held in different regions of our compatriots, allow us to learn about their history. Today’s conference will tell us about the life of the Tatars on the banks of the Irtysh, which has become a link between Russia, Kazakhstan and China. Today, about 200,000 Tatars live in Kazakhstan,” Vasil Shaykhraziev noted. He invited all participants of the conference to take part in the large-scale Sabantuy celebration, which will be held tomorrow.

Shalkar Baibekov, Deputy Akim of the Abai region of the Republic of Kazakhstan, also addressed the guests with a welcoming speech.

The event is attended by scientists, local historians, religious and public figures, representatives of Tatar public organizations and the media of the city of Semey, Abai region of the Republic of Kazakhstan, the Republic of Tatarstan and Siberian regions of historically compact residence of Tatars in the Russian Federation.

The conference participants make presentations on the study of the historical and cultural heritage of the Tatars in the regions of Siberia and Kazakhstan.