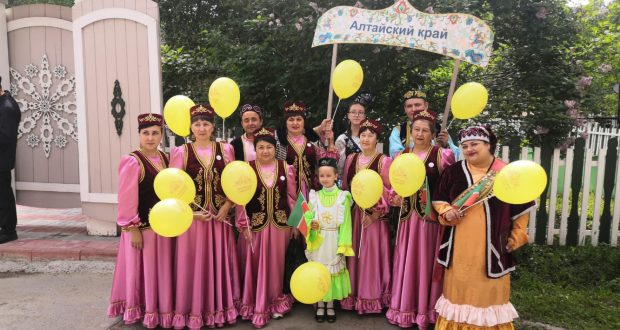 Siberian Sabantuy  in Novosibirsk  held a big festival of friendship of peoples of the Siberian Federal District “Siberian Sabantuy” took place in Novosibirsk. The team of the Altai regional public organization “The Center of Tatar Culture “Dulkyn” (Wave) took part in the celebration. Delegates from the Altai Territory not only became guests of the holiday, but also performed for the first time at a festive concert. The debut of the Duslar ensemble (artistic director A.N. Ruban) took place on the main stage. The team presented national songs and dances.

Our athletes also showed themselves. The winner in the category up to 80 kg was our countryman Sergey Grunwald. Chairman of the Regional branch of the “Federation of Koresh of Russia” in the Altai Territory Mustafin Sergey Maratovich took part in the judging of the wrestling tournament.

The chairman of “Dulkyn” (Wave) and a member of the Public Chamber of the Altai Territory Zinatullina Flora Viktorovna thanked the organizers for the invitation and long-term cooperation and invited everyone to the Barnaul Sabantuy on July 2.