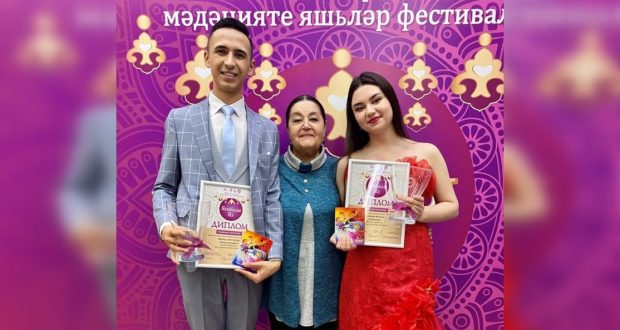 April 3, 2021 at the Kazan Youth Center named after I. A. Gaidar hosted the XXVIII Youth Festival of Tatar National Culture “Yagimly Yaz”.

The aim of the festival is the development and popularization of the Tatar national culture and the Tatar language, as well as the preservation of the cultural heritage of the Tatar people. This year the festival “Yagimly Yaz” is timed to coincide with the Year of Native Languages ​​and National Unity in the Republic of Tatarstan.

Congratulations to the 3rd year students of the theatrical creativity department of the theater, cinema and television faculty Yamikhullin Artur and Valeeva Fazilya with the title of Laureates of the 1st degree, as well as the 4th year student of the department of solo folk singing of the faculty of higher art school Dina Akhsyanova with the title of Laureate of the 3rd degree.

The students were trained by the associate professor of the department of solo folk singing Babaeva Gyulmira Bilalovna.