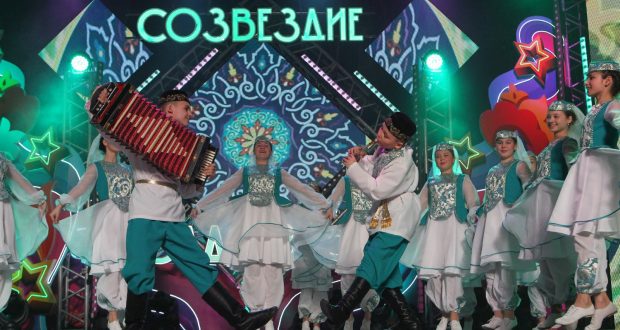 Superfinal of the festival “Constellation-Yoldyzlyk” will be held in Kazan

One of the main cultural events of Tatarstan is approaching – the grand Gala Concert of the XXII Annual Open Republican Youth Festival of Variety Art “Constellation-Yoldyzlyk”. Its participants will be determined by the superfinal, which will be held within the walls of the CSC KFU “UNIKS” and the Art Residence “Sozvezdie-Yoldyzlyk” from 9 to 13 April.
The opening of the superfinal will take place at UNICS this Saturday, April 9 at 11:00 am (journalists and bloggers are invited to attend the opening ceremony and all qualifying days of the superfinal).

A real creative battle will unfold on the stages, where the most talented children from all over the republic will demonstrate their outstanding abilities in seven nominations: “Vocal solo”, “Vocal ensembles”, “Choreography”, “Enterprise”, “Best music for a song”, “Best lyrics” and “Best video clip”.

All of them have already passed the most powerful selection at ten zonal stages of the project. Out of about 20 thousand children participating in the qualifying rounds, 5.5 thousand will meet in Kazan. Videos of the zonal stages can already be found on the Constellations-Yoldyzlyk YouTube channel. Also on the site Pro.kultura.RF and on the TNV channel, broadcasts of the zonal gala concerts of the project were carried out.

The festival movement has prepared a cultural program for the finalists: children will visit film screenings. In addition, they will be offered repertoire performances and programs of the Constellation-Yoldyzlyk Art Residence.

“Perhaps the greatest tragedy is when the Almighty gives a person a talent, but his creation does not use it. So Tatarstan has created a structure that justifies His hopes in the face of the festival movement “Constellation-Yoldyzlyk”. Our children are the gene pool of our civilization, which is the future,” said Dmitry Tumanov, general producer of the festival.

He stressed that the corps of heads of districts of the republic increased the amount of funding for the festival movement, as its representatives see great potential in it in forming the future “fund” of the creative intelligentsia of the republic.

During the qualifying rounds, the children not only demonstrated their talents, but also continued to learn – within the framework of the project, already established artists held master classes for everyone. Moreover, members of the selection committee held round tables for teachers. The jury and participants of creative meetings highly appreciated the significance and productivity of such events. In the context of the festival movement, such meetings have become traditional.

The guys will have to fight for a chance to go to the Gala concerts, which will be held at the CSC KFU “UNIX” (April 14) and the CRC “Pyramid” (April 22). The names of the winners will be announced on the stages, as well as the owner of a special prize “for the preservation of the national culture”, established by the State Song and Dance Ensemble of the Republic of Tatarstan only this year. The winner of the special prize will be invited by the State Ensemble to perform on the same stage with him. The winner will also have a unique opportunity to record the song in a professional recording studio.

We remind   that the festival movement “Constellation-Yoldyzlyk” is held under the auspices of the Commission of the Russian Federation for UNESCO and under the patronage of the President of the Republic of Tatarstan Rustam Minnikhanov.