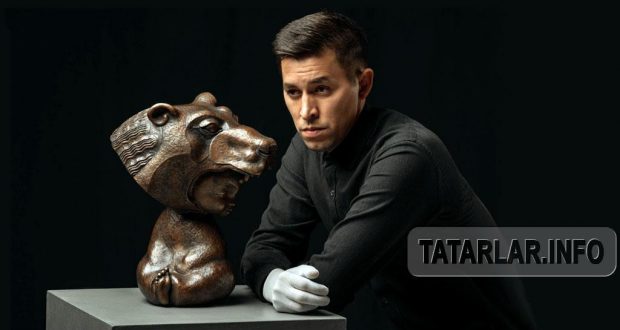 An exhibition of the Tatar sculptor Alfiz Sabirov will be held in Moscow from August 4 to October 3, 2021, at the State Museum of the East. Viewers will see more than eighty of the artist’s best works – sculptures in bronze and plaster, jewelry, graphic sheets, carpets.

The artist created his own mythology, elaborated in detail and embodied in a variety of images. This is the world of gods and warriors, oriental princesses, animal totems born by the artist’s imagination.

According to the generally accepted age criteria in the art world, Alfiz Sabirov belongs to the younger generation, but the depth of his work, plastic complexity and level of skill allow us to speak of an established artist. People like him are called “self-made man” today.

From 2005 to 2011, Alfiz Sabirov studied at the Russian Academy of Painting, Sculpture and Architecture. Since 2013 she has been participating in exhibitions. In 2014, his solo exhibitions were held in various Russian and European cities. The sculptor’s works are in many museums and private collections.

Alfiz Sabirov works not only in sculpture, but also in graphics, tries himself in jewelry. According to his sketches, designer carpets were created, in which weaving of a complex texture is combined with fragments of bronze.

Alfiz Sabirov’s works are distinguished by a variety of shapes and volumes, unexpected combinations of materials and textures. The master sprinkles colored drops of semiprecious stones into the bronze, sews the bronze “Stone of the Ancestors” with red threads, paints the lips of the goddess Sau invented by him with bright red lipstick. His horses, leopards and other animals that figure in the ancient philosophy of the Turks – Tengrianism, are endowed with new magical properties and sometimes acquire new names. Hence the name of the exhibition in honor of the sculpture of the same name by the author “Ayu bala”, translated from the Tatar “bear child”.

With an external chamber, his works are monumental. Alfiz Sabirov is not afraid to turn to large forms – mostly in plaster, inspired by the images of Antiquity, as well as the Ancient East. He creatively recycles archaic plots, offering his own plastic interpretation of it.

The artist, brought up in a traditional Tatar family, naturally absorbed the spirit of the cultures of the past. Alfiz Sabirov sometimes feels like a master of the era of the Great Nations Migration: “There are many national, cosmic, primitive motives and images in my work. It is based on ancient artifacts – those things that were found on excavations that were once ritual objects and have come down to us as facts of art in the form of fragments or fragments. I regard the structural elements of legends and myths as a state of life. As part of something bigger. ”

As a bearer of the memory of generations, in his myth-making, Alfiz creates new unexpected plots, akin to the archaic in their plasticity, forms, texture. This is how contemporary art is related to ancient artifacts.