Home / News / The 8th season of “One Day School” is closed: 60 people have been taught the basics of Islam 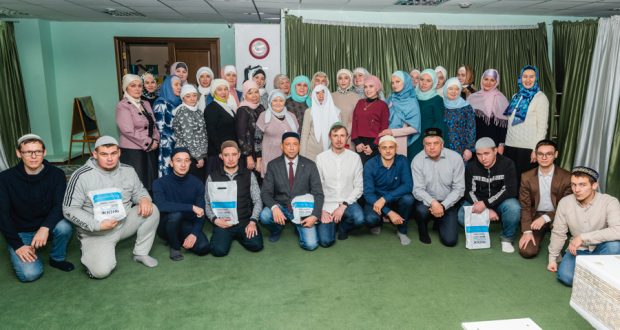 The 8th season of “One Day School” is closed: 60 people have been taught the basics of Islam

On the 25th day of the month Rabigul-akhir (November 30), the closing of the 8th season of one of the most popular projects of the Religious Board  of Muslims of the Republic of Tatarstan – “One Day School” took place in the Gaila mosque in Kazan. At the end of the eighth season, 60 people received certificates of teaching the basics of Islam.

The meeting took place in a very warm and friendly atmosphere. Imam-khatyb of the “Gaila” mosque Rustam Khazrat Khairullin drew the attention of the audience to the concept of “foundation” in a person’s life: foundation, this will be the final result. The foundation of a Muslim is faith, ”he said. Hazrat spoke about the basic tenets of Islam, shared instructive events from the history of Islam, and also revealed the secrets of making dua, answered questions and urged the shakirds to continue to acquire knowledge, and if they feel a lack of knowledge on a particular issue, contact knowledgeable imams.

The “One Day School” project allowed the participants to quickly and effectively master the skills of reading namaz and the basics of Islam in 8 lessons – one per week. In addition, the listeners learned about the basics of Islam, aqidah, the sire of our beloved Prophet ﷺ, learned the culture of making dua, studied the issues of halal and haram. At the end of the season, the graduates were presented with certificates, as well as a memorable gift: Kur’an, prepared and issued in the publishing house “Khuzur” by the SAM RT. At the farewell event, gratitude to the ustaz was also sounded.

The School of One Day project was first implemented by the muftiat in 2018 as part of the activities of the Dagwat specifically for beginners who are taking their first steps towards the study of Islam. In total, about 720 people have studied at the courses during this time, in fact, they have become practicing Muslims. Training is provided free of charge in Tatar and Russian, separately for men and women. The lessons are taught by specialists from the muftiat and khazrats.