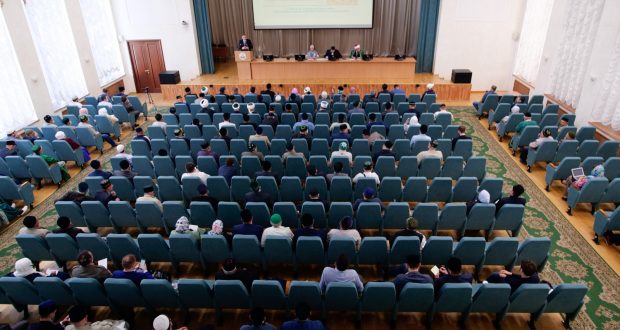 Today, June 3, 2021, the XI All-Russian Forum of Tatar Religious Figures “National Identity and Religion” has started. In the first half of the day, the official opening of the forum took place with the participation of Deputy Prime Minister of the Republic of Tatarstan, Chairman of the National Council of the World Congress of Tatars Vasil Shaikhraziev. After midday prayer, the delegates dispersed to discussion platforms, one of which was the Academy of Sciences of the Republic of Tatarstan. The event was moderated by Doctor of Political Sciences, Rector of the Bulgarian Islamic Academy Rafik Hazrat Mukhametshin, Senior Lecturer of the Russian Islamic Institute Reseda Safiullina and Mufti, Chairman of the Regional Spiritual Administration of Muslims of the Orenburg Region Alfit Hazrat Sharipov.

The head of the department of organization of admission of applicants and employment of graduates of the Bulgarian Islamic Academy, Aydar Karbulin, began his work. He spoke about the procedure for admission to an educational institution, the timing of the admission campaign, gave brief information about the curriculum.